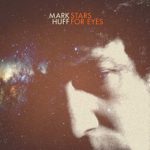 LOVE, LOSS, AND MYSTERY SET FOR RELEASE ON MARCH 23

“There are two kinds of singers: the ones you believe and the ones you don’t,” observes Mark Huff. “Anything that’s good stems from honesty.”

You can hear the ring of honesty throughout Huff’s ninth solo release, Stars For Eyes, as he negotiates the highs and lows of love and life in its 11 songs.

Nothing is simple about the characters in his tunes or their emotions. Even the bliss of falling in love can be laced with conflict.  He captures perfectly in the title track’s sonic dreamscape, elegantly painted with steel and electric guitars, keyboards, and an angelic choir of female voices to support the balance of limerence and doubt in his arcing vocal melody.

Huff chose his people wisely, Grammy-winner Chad Brown producing, Huff’s new compositions—and one Leonard Cohen classic—reinforce his reputation as a heralded Americana song craftsman and poignant vocalist while expanding his sonic vision with the support of a superlative musical cast.

In his new album’s “I Know You Don’t Want My Love,” a number driven by Huff’s acoustic guitar, he ventures into darker territory as the song’s narrator is driven toward madness and even, possibly, murder, by cold-hearted rejection. All the while, the warm, wailing tones of effects-laden pedal steel played by Russ Pahl (Pretenders, Dan Auerbach, John Hiatt, Lana Del Rey) provides ghostly commentary.

Huff joined by a host of other accomplished players on Stars For Eyes, which was produced by Grammy winner Chad Brown, who has worked with Ryan Adams, Faith Hill, Gretchen Peters, Tom Russell, Dr. John, and Hayes Carll. Brown won a Grammy in 2015 for his work on Mike Farris’ Shine for All the People. Other guests include guitarist Doug Lancio (John Hiatt), bassist Mike Vargo (Allison Moorer, Radney Foster), keyboardist Micah Hulscher (Margo Price) and Julie Christenson; the longtime supporting vocalist for Leonard Cohen. She reprises her singing role for Huff on his version of Cohen’s meditative “Almost Like the Blues,” which closes the album.

“… a kind of expressive intensity that seems to ricochet from one number to another.” – Blurt

Together, Huff and his players give Stars For Eyes an uncommon blend of cinemascope sound and storytelling depth, once again raising the bar for the rich musical journey he began in his teens.

“For this album,” Huff explains, “I took the filters off. I decided to liberate myself as an artist. I arrived at a point where I felt, after a lifetime of singing and learning from great songwriters like Ray Davies and the Beatles, that my vocal style had come into its own.

“When I was writing many of these songs, I’d also been in a relationship—and clearly, I did not get the girl, so that affected by perspective. And I knew that since I was ready to get personal with these songs really, I didn’t want it to be a typical Nashville sounding album, so I decided to work with Chad and to get a diverse group of musicians who could play deeply rooted music with an ambient sonic approach.”

That approach turns songs like “Carolina Blue,” a kind of cosmic country waltz, into iridescent works of pop craftsmanship, balancing the poetic sensibility of Dylan’s Nashville Skyline with the scope of Daniel Lanois’ earthier productions. All the while, Huff’s voice, and guitar serve as the album’s compass.

Although most of the songs negotiate the turns of life’s emotional landscape, “Big City Down” is an ode to his adopted hometown, Nashville. “When I moved here, I was welcomed with open arms by the music community,” he says. “I’ve felt at home here ever since.”

After establishing a strong career that began in his native Las Vegas, Huff relocated to Music City in 2003. Inspired by a mix of music brought into his home by his mother and older siblings, which ran from Muddy Waters to the Rolling Stones to the Doors to Neil Diamond, he started a garage band with his brother Rick as a teenager. Huff’s first original band was the punk- and British Invasion-inspired Smart Bomb, which quickly gained momentum, drawing as many as 1,000 fans to the frat parties and outdoor shows they played.

Huff’s talents as a singer, songwriter, and charismatic performer grew, as did his regional reputation. In 1989, he released his first solo album, Happy Judgment Day. Through the ’90s he made a series of heralded discs including 1999’s Skeleton Faith, which won the Best Album and Best Artist awards, as well as the Best Single award for “White Trash Town,” in the annual, fan-driven Las Vegas City Life music poll. All the while he played to increasingly larger audiences at local venues like the Hard Rock Hotel and the House of Blues, where he opened for Chris Isaak, Al Green and Peter Frampton, among others. He also launched his busy international touring career and had performed in arenas as an opener for Bob Dylan and Willie Nelson.

After arriving in Nashville, Huff met Americana star Allison Moorer, who was so impressed with his songs and performing abilities that she invited him to open on her U.S. tour. In 2005, he cut his first Nashville studio album, Gravity, and in 2010 he recorded and released Feels Like California. The success of those albums and the recent Down River EP has continued to widen his fan base on both sides of the Atlantic and kept him on the road, performing solo and as a headliner, and opening more shows for Dylan and Steve Forbert.

“I love the cycle of making records and touring,” says Huff. “Being in a new place every night and sharing my songs and stories with people makes me feel alive. I thrive on it, for I love being able to meet so many interesting people along the way; so for a songwriter, this makes for great material for other songs.”

Among them was Leonard Cohen, whose “Almost Like the Blues” appears on Stars For Eyes, and who gave Huff some indispensable advice. “I was struggling with a serious case of writer’s block at the time and felt like I couldn’t get anything good on paper.” Leonard said, “Sometimes you’ve got to write some shitty songs to get the good ones flowing again. And remember; a song is never finished.”

Huff took that to heart, and as he performs the songs from Stars For Eyes on the road, they’ll explore new progressions, new sounds, additional nuances of tone and emotion. And continue to grow. So, will their author.