Dan Navarro is a voice of many: Can you hear me now? 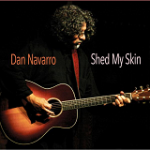 Dan Navarro Is A Voice Of Many: You, Me and Himself

His voice carries through some of life’s hallowed halls

Dan Navarro is the perfect troubadour. He carries the load on his back; mile after mile, block after block wearing out the soles of his shoes. His songs speak; for they will make you cry, laugh and think and they resonate. From his childhood days in the California-Mexican Border to the streets of L.A. and NYC, Dan has heard his fellow artists’ cries and is adamant about his passion making sure they have a fair share in the ever-changing music business world.

Shed My Skin marks the first studio solo album from this prolific artist in almost seven years after his songwriting partner Eric Lowen died after being diagnosed with ALS in 2004 (he later died in 2012). The album was produced by Dan’s long-time friend and collaborator, Steve Postell, (Danny Kortchmar, Jennifer Warnes) and with a host of players that have long been supportive of Dan’s music over the years. The album’s song list features eight Navarro originals plus four covers; two by old friends: “Night Full Of Rain” by Kenny Edwards and secondly, Tom Wilson of Blackie & the Rodeo Kings and Lee Harvey Osmond with “You Drove Me Crazy.” Rounding out the album is the haunting “Sweet Sixteen” by Billy Idol and the Jimmy Webb standard “Wichita Lineman” complete with a lush arrangement of the impeccable ballad. Looking back at on the album’s production process, Dan recalls, “I was determined to make a statement I’d never made before; one of gentility, one with an acoustic foundation and lastly, telling these stories about reinvention and renewal.”

His duet with blues-soul singer Janiva Magness, “You Drove Me Crazy” (touted as a prison duet), is a Spanish flavored waltz about two starry-eyed lovers lamenting over their failed romance, “you drove me crazy, and now I am going to stay that way.” Dan is a full-blown romantic for sure, and this seals the album with a kiss.

Growing up at the California-Mexican border, Dan spent his childhood learning how to live in between the lines. Lines that came in various forms – physical, emotional, and mental – continuously moving about – drawing from his artistic well.  He moved back to Los Angeles, enrolled at UCLA and left after a few years when the musician bug bit. So, Dan took the job as a buyer at Tower Records where he learned about the retail side of the record business, and by night he played at the local L.A. songwriting clubs.

In 1980, Dan decided to spend a year in London working with the management company for the British rock band, The Moody Blues. When his year was up, the legacy with songwriting partner Eric Lowen, began at baggage claim upon Dan’s arrival: “…he picked me up at the airport, and we walked straight into a partnership that lasted for almost thirty years. Pretty much until he passed away in 2012,” Dan recalls.

During this 30-year history, the two songwriters spun gold with songs like “We Belong,” and when Pat Benatar recorded that, they went from 0 to 60 mph with their careers. The duo continued to have songs covered by pop-rock-hip-hop-folk genre artists like; The Bangles, Dionne Warwick, Keb’ Mo’ and Nile Rodgers (Chic, Madonna) that top a lot of different charts on Billboard, radio plays and celebratory reviews. The duo continued to make wonderful music, and it’s a part of Dan’s life that he cherishes the most.

Since that day, Dan has had to adjust, without Eric; how to write and perform solo. “I had to figure out how to be both comic and straight man in the same body. My songs are decidedly poignant. They’re depression upon loss upon craziness upon idiocy.” When Dan, writes he tries to draw “some connections between the head, heart, skin, whatever, the visceral, the mental, the emotional, the cerebral – is important to me.” – Dan Navarro (As told to: Art Of The Song: w.artofthesong.org)

Dan also found his way into voice-over work and scored huge when he got hired by Seth McFarlane to be a returning voice for the long-running, animation series, “American Dad” and “Family Guy” on Fox TV. He has expanded to video games, short films, commercials, and full-feature movies, like “Happy Feet,” “The Lorax” and “Pirates Of The Caribbean.” His most beloved song, “El Perro” sung by the character ‘Cilantro’ the rude mariachi, on Fox’s series, “American Dad” is now one tune that has made its way to his live shows as a crowd favorite.

Dan Navarro has a voice for a lot of characters, but most honored and treasured one is being involved with the ongoing issues with music and all its entanglements on the legal side. He has served on boards from Folk Alliance to SAG-AFTRA (the merged Screen Actors Guild and American Federation of Television and Radio Artists), the Recording Academy, The Levitt Pavilions in LA, and more. But his most important piece of law is the Music Modernization Act, so all creative kindreds are paid what they are worth through the new platforms like Spotify, iTunes and other non-traditional avenues of distribution.

Navarro has appeared in Washington speaking about artists’ rights and intellectual property issues, on behalf of Nashville Songwriters Assn Int’l, SoundExchange, SAG-AFTRA, musicFIRST Coalition, BMI and The Recording Academy, including testimony before the Senate Judiciary Committee and the Copyright Royalty Board. Dan currently serves on the national and local boards of SAG-AFTRA and the AFM/SAG-AFTRA Intellectual Property Rights Distribution Fund. All in line to hopefully to regain creative control for the artist in the areas of copyright and royalty payments.

Over the years, Dan has built his solo audience on the foundation of being persistent as well as well entertaining. He has performed at many of the prestigious folk and songwriter festivals from Kerrville, TX to The 30A Songwriters Festival in Florida. He has hit venues big and small, from McCabe’s in CA to The Bottom Line in NYC and sometimes, he finds himself in people’s living rooms for house concerts. The connection between him, the troubadour, and the audience is the gift worth giving.  “I advocate for two reasons: to shed light on the murky issues creatives share — ownership, control, exploitation and monetization of their work — and to put real money in their pockets, for themselves, their families and their legacies.” – Dan Navarro

If it is true that, as we shed our own skins, we cycle through a thousand lifetimes, then Dan Navarro has lived the lives of a thousand men so far. Those are stories we should all hear.

Uncategorized
Animation Mag Runs With Tim Grimm’s “GONNA BE GREAT”
Come on down to the Bayou: Morgan City, LA