Kick your heels up! 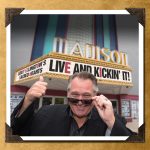 Back up by his band, The Sacred Hearts

Recorded live with his band, The Sacred Hearts in various venues around Cincinnati, you can hear the audience respond to Leroy with laughter and applause due to the reality factor of the sentiment. Live And Kickin’ It does that; gives it kick in the old keister! Gets the audiences movin’!

This gem of an album is out on March 20 with a show supporting Delbert McClinton that night at Ludlow’s Garage in Cincinnati, OH. Show starts at 8:30 PM. Check out the site for tickets: https://www1.ticketmaster.com/event/1600577BFF7C7D3C

Leroy’s band, The Sacred Hearts are some of The Queen City’s most prominent musicians: Ellington on lead vocals and saxophone, Mike Grosser on bass guitar, Marcos Sastre on guitar and vocals, Charlie Fletcher on keyboards and vocals, Max Gise on guitar and Josh Parker on drums and vocals. This band delivers the best in blues and soul music around!

Over the years, Leroy has been very active within the Cincinnati entertainment community with his production company Leroy Ellington Productions (L.E.P.), promoting shows and special events. He was handpicked by the family, to take over the existing Johnny Schott Talent & Events when the beloved Schott died in 2012, giving him full ownership.

This record is the first to be released on his newly minted label with Gina Hughes, Infiniti Group Records, that will bring you the best of the blues music that money can buy!

Uncategorized
“tough times they never last, tough people do” – Ben Reel – THE NASHVILLE CALLING OUT 3/27
Joe Nolan Drifters Out May 8 On Fallen Tree Records An album filled with wandering thoughts, hearts, and dreams