Devon goes back to his roots… 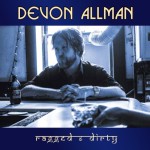 Devon predicted to Billboard, “…this one’s going to be really heavy on guitar and come out and punch you in the teeth.”

Allman answers his fans and critics

Atlanta, GA – Ruf Recording artist, Devon Allman, released his third solo album Ragged & Dirty on October 14th via the award winning label. Produced by Tom Hambridge, a Grammy winner, at Joyride Studios in Chicago, this CD debut at #4 on the Billboard Blues Charts and has been a game changer for Devon. The young Allman continues the legacy of the family name with his music by melting blues, rock, soul and various other genres. With this release, he anchors himself even deeper in that rich musical soil.

“… is a solid showcase of his talents—from powerful, soulful vocals to dig-in-and-let-fly guitar work.” Guitar World

Starting in October, Devon found himself, on the cover the Allegro’s trade magazine as a featured artist. This magazine goes out to all the retail stores to get them excited about the upcoming release. Allegro Media Group is the distribution company for Ruf Records.  Over the course of the past few months, he has been featured or reviewed in the following heavyweights of the media, Guitar World, Hittin’ The Note, Blues Blast, Elmore and Guitar Player.

The album was produced by Tom Hambridge, a Grammy winner and well-known musician himself, (Buddy Guy and George Thorogood); Hambridge gathered up local Chicago musicians, to get a sound that would fit Devon’s rich voice. Hambridge also wrote and co-wrote three songs for the album, in which Devon states, “Tom custom wrote some songs for this record that really aligned with my path.”

There are electrifying blasters, thoughtful acoustic songs and head-nodding country-rock tunes covering all topics: love, hate, loss and gain that carry an insight for the listener as the next song queues up. The grit in his voice and the emotional touch of his guitar work that Hambridge was able to bring out in him, was elating for Devon, stating back in May, “this is one of the most profound experiences of my life.”

As a member of Royal Southern Brotherhood, he thanks his experiences with them for expanding his musical ear, “RSB has been such a deep, rich, globe-trotting experience that it definitely changes your life and gives you new perspective. Anytime you’re involved in something to that degree, it will show up in your art. I think the experience has given me more depth as a writer. I’m more willing to let the groove take over and not force things vocally.”

But as the new year approached, Allman started to reorganize himself and with that came major changes. He decided to peel away from the popular RSB to focus on his solo work. This was met with a heavy heart.

Devon has always been a media favorite. His charm is what makes people gravitate to him. He’s easy to talk to, listens intently to the interviewer and always gives a good response. Sometimes he will include a humorous tale that has occurred over his long career.

So let the quotes roll in:

“…this is a really super release which deserves to cast its own shadow.” B’mans Blues Report
—“he’s one of the best blues rock singers out there and his guitar work is outstanding – melodic and expressive” from Blues Debut

And many more along the way…

If you are interested in an interview or just need more information: contact Jill Kettles at Miss Jill PR – via telephone – 404-213-8542 or email: Jill@missjillpr.com or visit www.missjillpr.com

Devon and his band will be supporting “Ragged & Dirty” with the following dates:

Uncategorized
No U – Turns Allowed… Cyril Neville says
Hey I hear an echo!