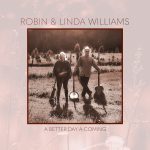 Send A Message of Hope In Song: A BETTER DAY A-COMING

“… vocally and instrumentally, the Williamses combine impeccable musical discipline with a bare simplicity and an utter lack of pretension.” – The New York Times

A Better Day A-Coming, the 24th album from Robin & Linda Williams, uses the prism of the past to convey a message just as suited to the present. This album was recorded from August 2019 to August 2020 in their living room with its 10-foot ceilings and plaster walls and their good friend Kevin McNoldy assisting as engineer and co-producer. A Better Day A-Coming will be released on July 30, 2021, with tour dates as a duo and with their longtime friend Garrison Keillor.

This album marks the culmination of a series of active transitions since their last release in 2013; a re-structuring of their personal and professional lives, coming to a head with their leaving their Shenandoah Valley, Virginia farmhouse where they’d lived for 42 years and moving to town. After more than 25 years, they dropped their road band and returned to their roots to working as a duo. Simultaneously, the adage that “no one gets by forever without the aid of medical professionals” became a reality.

Though their forward momentum of life on the road began to be interrupted, their creative juices suffered no such interference, and the songs kept flowing. While off the road, they used this period to write and start this new project. During the first session, the couple laid down the primary tracks and had bassist Mark Schatz and multi-instrumentalist David McLaughlin come by the house for the second. The digital files were then sent to Richie Dworsky (Hammond B3 organ), Kevin Maul (dobro, pedal steel), and Patrick McAvinue (fiddle) to add their parts via remote.

Then came the Covid19 Pandemic of 2020 and months of seclusion, which put the brakes on the couple. But Robin and Linda look back at those months of isolation as “the gift of time.” “With no road work taking us away from home and no time crunch pressuring us, we could focus on the songs and tweak the mixes and sequencing to the point of really enjoying what we heard. Now we can’t wait for others to hear it as well,” Robin and Linda explained.

After the hundreds of thousands of miles they’ve traveled, after the thousands of nights they have performed -plus the hundreds of songs they have recorded over a more than 40-year career, one thing’s for sure, Robin and Linda Williams honestly and authentically present their music. With them, it’s all about the song, whether it’s one they’ve written or chosen from another source. Songs on A Better Day A-Coming cover topics of history, small-town gossip, big city living, and all the characters met along the way. A couple of covers of note, “Tower Of Song” from Leonard Cohen, “Leaving Home” an old Charlie Poole favorite, and one from Scott Miller, “Someday Sometime.”

No Depression magazine praises Robin and Linda Williams for creating “music that is both comfortable and thoughtful – a rare combination that explains why and how the Williamses are able to keep on an even keel while musical trends come and go. They don’t play at being country – they are country.”

The Williamses have built their career like an old house, with a firm foundation, thick walls to withstand the weather, and a lot of love and affection, and it shows. “We think the release of this recording brings a transitional period to an end. We are comfortable in our new home, we are healthy, and we are having fun playing as a duo. But the CD is also a transition all its own which leads us forward to A Better Day A-Coming.”