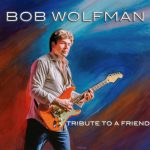 BOSTON GLOBE says of Bob Wolfman: “Simply one of the best guitarists in the U.S. today!”

“We left Manny’s and headed down the street, and we wound up at a steak house restaurant where Jimi treated us to a great dinner.”

BOB WOLFMAN RECALLS A SPECIAL FRIENDSHIP WITH JIMI HENDRIX AND RELEASES LONG-AWAITED ALBUM – TRIBUTE TO A FRIEND – OUT ON JANUARY 14, 2022

“His poetry, his vision, his energy, and his innovative creativity…He didn’t just revolutionize guitar playing; he revolutionized music.”- Bob Wolfman

A young 15-year-old Bob Wolfman and his drummer friend headed downtown to Manny’s Music Store on 48th street in midtown Manhattan on a Friday afternoon after school.  They were pretty chummy with most of the sales staff, particularly Mickey, the drum salesman.  Bob’s drummer friend and Mickey were chatting about drum equipment.  It was closing time, and as the rolling security gates were being pulled down by the staff at the front of the store, salesman Mickey glanced over that way and quite nonchalantly said, ‘Oh, it’s Jimi.’  Bob had no clue what or who Mickey was referring to, but then turned his head to look and then did a double-take and realized it was indeed Jimi…Hendrix.

Bob recalls, “Jimi just floated all the way to the back of the store where he met up with the store owner, who had a couple of Fender Strats laying across a big glass display counter.  They started talking about customizing Jimi’s guitars, and being the precocious teenager that I was, I butted in and interjected my own suggestion since I was already customizing pickups on my own Strat.  As I recall, the owner tried to ignore me and was somewhat dismissive, kind of like WC Fields with a vibe like ‘go away sonny, you bother me . . .. you draw flies!’  However, Jimi turned to me, and we got into a fairly in-depth discussion about increasing power output on Strat pickups.  Jimi then put his hand on my shoulder, and we headed to the front of the store, where my friend joined us.  We then headed down the street to a local restaurant, and Jimi treated us to a great steak dinner.  I was mesmerized by the “EXPERIENCE” of talking to the man who was my biggest inspiration and who became the greatest influence throughout my entire life.”

“I swore to myself I must have been dreaming!” laughs the Boston musician.  Meeting Jimi even once was such a huge thrill for Wolfman that he had the good fortune to meet his hero even once, but little did he know the two would connect and converse several times over a few short years before Jimi died.

Bob was devastated when Jimi passed, and as his hero’s death brought him to tears, he vowed he’d pay some tribute to the late great genius that transfixed the world.  Jimi’s innovative techniques and tones were totally groundbreaking, and since then, well, the rest is history – from Guitar Magazines to Musicologists to Sir Paul McCartney to Jeff Beck have sung his praises: “The first shockwave was Jimi Hendrix… He came along and reset all of the rules in one evening.” – Jeff Beck

“From the first time I heard Jimi’s music, I knew I had to become the best professional guitarist I could be.  “His poetry, his vision, his energy, and his innovative creativity; he didn’t just revolutionize guitar playing, he revolutionized music.”  – Bob Wolfman

Now, 51 years after Jimi’s death, Tribute To A Friend is the Jimi Hendrix-inspired album Bob Wolfman has wanted to make for decades and will be released on January 14, 2022. Jon Butcher, a well-known artist, produced the album, and someone Bob had never met until it was suggested to work with him on the project by a mutual friend. It was recorded at a few studios around the Boston area. During these sessions, the two became close, sharing so much respect and appreciation towards each other that it overflows into the music. “Ultimately, we feel that Jimi would be proud, and I’m thrilled that I’ve accomplished one of my most important and major life goals,” explains Bob.

Wolfman said, “Even more than the Beatles, Jimi’s poetry, his personality, his energy, his vision didn’t just revolutionize guitar playing; he revolutionized music. Like Keith Richards said about music in the 1960s—everything changed from black-and-white to Technicolor.”

Wolfman opted to interpret nine of Hendrix’s less-performed classics he selectively chose from Jimi’s catalog. Some of the tunes he chose were “Gypsy Eyes,” “Freedom,” “Angel,” “Castles Made of Sand,” “You Got Me Floating,” and a swinging cover of “Come On Baby (Let The Good Times Roll),” a Sam Theard and Fleecie Moore tune from 1942.  He also included two Jimi-inspired original songs, “Moon Candy” and “Parachute.”

Various Notes from Bob about the songs he chose:

“Gypsy Eyes” – “This is simply a KICKASS tune with great energy and a very seductive beat!”

“Freedom” – “It has movements like an opera or symphony, and Jimi’s playing is just unbelievable.  Incredibly unique, delicious tone and licks; a ‘chopsfest’ any guitarist will drool over.”

“Angel” – “Jimi could create a total visual experience for the listener (incredible mental imagery and textures) with his sound palettes.”

“Castles Made of Sand” – “Pure poetry – epitomizes the “touch,” subtleties, and nuances that ONLY Jimi could produce—certainly not easily replicated. It took me almost six months to feel comfortable enough to record this gem. BUT I’m not even really close to Jimi’s execution,” exclaims Bob.

“You Got Me Floating” – “A fun ride all the way through, and we had a lot of fun recording this tune.  Notice Jon Butcher’s backup vocals, which he totally nailed and exemplifies his skill.”

Interpreting Hendrix’s passion, sound, and the various musical devices he utilized is a formidable challenge.  “Duplicating Jimi’s nuance, it’s more challenging than any other guitarist I’ve ever tried to copy. Nothing is as challenging as Jimi because it’s all about his incredible touch.”

Wolfman has never been better equipped to do the project justice. “When I was in high school and college, I played a lot of Jimi’s music,” he said. “But now, having had so many more years of experience and training, I have a much deeper level of understanding.”

“Bob Wolfman is a terrific guitarist, but more than that, he is a dynamic musician and an energetic, dedicated educator.” – Larry Coryell ~ Founding Father & Pioneer of Jazz/Rock Fusion

Following years of successful performing and teaching, Wolfman is grateful for his past and present and looking forward to completing and delivering this album. “I’m blessed because I’ve been able to turn my passion, my love, into my livelihood,” Wolfman said. “I’m at a great time in my life. I’m excited about Tribute To A Friend and the musicians on the record, and I know people are going to love it when they hear it.”

Uncategorized
Kodachrome is good on a sunny day…
Serabee Wishes Fans A Joyful Holiday Season! Album Out In 2022