No Small Porch For Albert… no no no way… 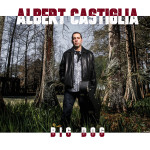 In His Big Backyard

On May 20th, Big Dog will confirm that Albert Castiglia is a different breed from the lightweights and arrivistes who dominate the modern music scene.

After five acclaimed albums and decades of blazing blues-rock shows, you might argue that you’ve already made his acquaintance. But by the Florida bandleader’s own admission, Big Dog is the first release to truly get under his skin. “I just wanted to make a record that best represented who I am, as a musician, singer, guitarist and live artist,” explains Albert. “With every release, I’ve come close, but this time, producer Mike Zito helped me nail it. He and label boss Thomas Ruf wanted me to make a raw, rocking blues record. That’s what I’m about- that’s who I am.”

At 46, he’s slugged his way into contention the old-fashioned way: writing from his heart, bleeding into his performances, eating up the road. “I have no illusions about what kind of guitar player and singer I am,” he states. “My style is raw, unadulterated, crude and heavy. I don’t have the technical proficiency of other players, but I play what’s in my heart and what I feel at that moment. When I write songs, they have to mean something.”

Recorded at Dockside Studios, Louisiana, there’s not an ounce of fat on Big Dog’s eleven tracks, with Albert darting between self-penned originals, cherished covers and co-writes with some of his closest compadres. “You could smell the mojo in the sweet Southern air,” reflects Albert, “and you could feel the mojo in the recording studio. We had a studio-savvy band with an incredible amount of soul, and Mike’s role as producer was the wildcard.”

Albert describes Big Dog as a “driving along the highway with the top down kind of record”, and “Let The Big Dog Eat” sets the pace (complete with breakneck riffing and improvised barks). Other foot-down cuts include the call-and-response “Don’t Let Them Fool Ya”, the searing “Where The Devil Makes His Deals” (written with Graham Wood Drout) and the observational wit of “Get Your Ass In The Van”. “That song was a response to all the poor, pampered souls,” grins Albert, “who think that music is one big American Idol episode.”

Some songs cut deeper. Co-written with label mate and Royal Southern Brotherhood’s Cyril Neville “Somehow” addresses the plight of the homeless and displaced in modern America. “The poor are commonly used as tag lines in speeches by politicians seeking public office,” points out Albert, “but when the cameras are off, they are often ignored and scorned. The song reflects a sadness, yet hopefulness, on how we as a society treat these people.”

Another poignant moment is “Where Did I Go Wrong”. A soul-drenched slow-blues with harp from Johnny Sansone, it’s taken from the iconic Junior Wells’ You’re Tuff Enough album, and in many ways, brings Albert’s story full-circle. Born on August 12th, 1969, in New York – before moving to Florida aged five – Albert made his professional debut in 1990 with Miami Blues Authority, but truly hit the international radar after Wells invited the young bluesman into his solo band for several world tours. “It was an incredible adventure,” remembers Albert. “Ever since I was a kid, I wanted to be a Chicago bluesman. Junior opened the door for me to do that. He recorded his last studio album, Come On In This House, at Dockside Studios. What a sign!”

The gig was a shop-window, and though Wells died in 1998, there was no stopping Albert, whether he was joining the great Atlanta vocalist Sandra Hall for national tours in the late-’90s, or holding his own in onstage jams with everyone from Pinetop Perkins to John Primer. Nobody’s sideman, his own triumphant solo career began with 2002’s Burn, followed up by 2006’s A Stone’s Throw, 2010’s Keepin On and 2012’s Living The Dream.

In 2014, Ruf debut Solid Ground was declared “smoldering and intense” by blues critics. Now, Big Dog ups the ante, offering eleven new songs to get your teeth into, and supported by a full international tour that promises bark and bite.

If you thought you knew Albert Castiglia, you don’t know the half of it. “I think this album is a major game-changer for me,” he says. “No matter what happens after Big Dog’s release, I’ll always be proud of it. When we tour this album, you can expect a balls to the wall, rockin’ blues show. Expect to get what I’ve always given you – my 100%.”