Soon you will know all about JB… 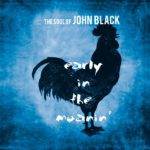 The Soul Of John Black Early In The Moanin’

Is Greasy, Slippery and Groovy

The Soul Of John Black is back – it’s part Chicago blues shaken and stirred with Delta mindfulness and a Memphis soul garnish.

The Soul of John Black has not been sold. It’s alive and well. He’s out and about – walking the streets with shades over his eyes.  This eclectic mix of blues, soul, jazz and funk with slices of hip-hop grows arms and legs as it spins on the record player. Early In The Moanin’ will be released on February 3, 2017, on Cadabra Records through CD Baby.

John Bigham; “JB” – as he’s known to friends – will be appearing at the 2017 Folk Alliance International Conference for two private showcases on February 17 and 18. This will be a one-of-a-kind acoustic setting showing off his guitar chops that are old school Delta style mixed in with reggae and soul.

After eight years in Fishbone and a stint with Miles Davis, The Soul Of John Black calls Early In The Moanin’; his “love letter to the blues. I’m taking it back to Mississippi to the Delta, in my own way.”

John himself produced and recorded Early In The Moanin’ at Tiger One Studio in Los Angeles bringing in some ace session players like Jake Najor (Big Daddy Kane), Mark Levy (Duradero Drums), Greg Camp (Smash Mouth) and Curtis Sanford (The Deele). The slice of Hip-Hop comes from the genius mind of Richard “Segal” Huredia, a well-known sound mixer, known for his work on Dr. Dre’s seminal album, The Chronic.

“I learned about music from my friends, my parents, and the radio,” JB says. “In Chicago a lot of soul-blues was popular and even doo-wop, but when I got turned on to Jimi Hendrix and Led Zeppelin, as a guitar player there was no turning back.”

With that broad stylistic education under his belt, Bigham moved to L.A. to pursue a career in music and began working as a touring sideman and session player. His first high-profile gig was playing guitar for R&B hit man El DeBarge. But JB’s personal history as an experimenter goes back to 1989 when he began an eight-year tenure playing guitar and keyboards in pioneering ska-funk-punk band Fishbone.

JB’s career has been filled with critical praise from Rolling Stone to NPR, nominations from The Blues Music Awards and The Independent Music Awards as well as studio session work with Dr. Dre, Eminem and Nikka Coats amongst others.

“Oddly enough, I didn’t get into really deep old school blues until I was working with Miles [Davis] and he recorded songs with John Lee Hooker for the soundtrack to a movie called The Hot Spot. That music affected me profoundly. John Lee Hooker became one of my main guys. I also figured that if his music and Miles Davis’ could blend so beautifully, I should be able to find my own way of combining everything that I love. And that’s what The Soul of John Black is about.”

Using words like wobble, talking about raking leaves and honoring Bobby “Blue” Bland in “Cher” (with a nod to the smooth crooner’s classic “St. James Infirmary”), The Soul Of John Black creates a sexy mood with his voice and rhythms.

“I say, Cher  – I love your pretty hair – well I know this might seem strange, but I can’t get you off my brain, and I’m well aware it’s the type of thing that get you put in St. James” –  “Cher”

You can almost see a smooth grin; slide on his face.

So sit, pour a glass of your favorite potion and get seduced by The Soul of John Black. You will slip into another world.

For a Soundcloud link stream: https://soundcloud.com/thesoulofjohnblack

Uncategorized
Time to get the jalopy ready to head to Folk Alliance 2017
Turn Up The Funk…. Turn The Beat Around…