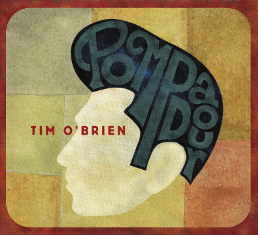 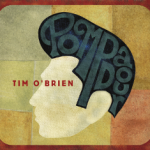 Multi-award winning bluegrass-folk-singer-songwriter Tim O’Brien greases the musical wheel with Pompadour set to release on October 30th on his label Howdy Skies Records. Produced and recorded by O’Brien, he continues to meld his love for the traditional sounds of bluegrass and country with his dash of modern that finds him in a new place in life.

“…there’s a breakup, an assessment and ultimately delight at the end,” Tim O’Brien states, but then concludes that, “It’s just me now.”

It’s been four years since the last Tim O’Brien solo record, and he has not sat idle. He’s been fronting, piloting and performing with folks like Steve Martin and Mark Knopfler to Hot Rize and Earls of Leicester, a group that includes dobro-master, Jerry Douglas. He’s achieved award-winning success, played with a vast grouping of musicians and yet the solo work keeps tugging at his feet.

The seeds of Pompadour took root about three years ago when O’Brien welcomed his New Zealand traveling colleagues to Nashville. “Gerry Paul is a guitarist from Wellington, New Zealand, and Trevor Hutchinson is a bassist from Dublin, Ireland,” O’Brien says. “We grabbed a couple of days and recorded. This album was meant for the three of us to tour behind, but a lot of other things got in the way. And Gerry and Trevor both play with various bands, so I decided to finish it up on my own.”

Pompadour swirls together bits of bluegrass, deep-roots Appalachian music, field hollers, old-school rock ‘n’ roll to traditional jazz and even James Brownian funk. The same applies to the perspectives from which O’Brien addresses the central theme. The spare lyrics of “I Gotta Move” and use of everyday images on “I’m A Mess For You” imply rather than spell out a story of loss and redemption. A steady-rockin’ groove drives the classic trope of asking a doctor for a cure to heartache on “Give Me A Little Somethin’ Take Her Off My Mind.”

O’Brien hopes this release will touch his listeners more personally than much of today’s new music. “This album feels really good to me,” he sums up. “I love collaborating with other people, but I also like to stretch out and achieve things I might be best able to do on my own. It hangs together and tells a story. It’s honest. It shows who I am as a person as well as a musician. That’s something I can be proud of.”

Short Order Sessions is an online shop that releases two download tracks each month on Amazon, iTunes, and other digital outlets. “I was inspired by Mo Ash and his Folkways vision. He recorded tons of stuff, down and dirty, and kept it all in print. He dodged commercial pressure somehow and was still able to do his own thing. I was thinking; Friends come to town, and we might jam at my house, and I’ve often thought it would be great to catch some of those moments. And I had these tracks in the can and ideas for others. The digital delivery system has changed everything, and I figured – why not carve my own model? In a way, the Pompadour CD is really just a way to advertise SOS.”  For more info: www.shortordersessions.com

Tim started this lifelong career when he told his mother that he knew 200 songs, and that was enough to get him through. He has done pretty well, don’t you think?

There will be a support tour starting in October and Tim is booked by Mongrel Music. Brad Hunt will handle radio.

You can view all things O’Brien at his website: www.timobrien.net

Download a photo by clicking the link and photo credit goes to Scott Simontacci – http://missjillpr.com/wp-content/uploads/2014/10/Tim-OBrien-PR-Photo.jpg