Turn Up The Funk…. Turn The Beat Around… 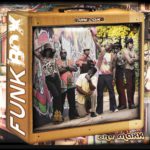 No Instructions Needed To Dance

“We didn’t have to study it; we could basically do what’s in our hearts.”

The Maxx doesn’t study soul music; they live it. From their Atlanta beginnings in 1980, founding members Rod Whittaker (bass/keyboards/vocals), Leroy “Roc” Lovelace (sax/vocals), and Steven Rollins (guitar) embarked on a journey of incorporating the high energy choreography and musical precision of the soul and funk legends who raised them; like Earth Wind and Fire, Stevie Wonder and Chic.

Then, The Maxx picked up fiery vocalist Rainy Middleton along with Dwight Smith (drums), Andre Bernard (trombone/keyboards/vocals) and Menes Ray (trumpet/vocals). The group honed their live stage presence while performing over 125 days out of the year with personalized set lists for conventions, corporate events, and festivals. All of this culminated with their latest six-song EP that brings the stage to the studio.

“It was the next evolution. We always tried throughout the span of our career to reinvent ourselves and do something different, and we reached the pinnacle the way we’re doing now,” says Whittaker.

The Maxx’s reinvention into an independent recording band is the group’s way of taking ownership of their music at a time when many labels discourage creativity. Instead, the band prefers to make music from scratch and remain true to their origins. “When you see the band live, it’s almost like somebody took you back to the 70’s, and you’re sitting in Madison Square Garden watching The Commodores or the Ohio Players or something like that,” says Lovelace. “It’s not only the song but the way they perform the song. It’s just this kind of demeanor of the band. We definitely bring that.”

In the making of their EP, The Maxx employed a member of their extended family in The Soul of John Black. The former Fishbone member and Miles Davis percussionist was behind most of the EP’s writing and production. “We have a personal relationship with him for years; he used to be a part of the band. It only made sense to have him on board as a principal writer and producer,” says Whittaker. The Soul of John Black also adds vocals on the bluesy “Love Is Gonna Get Ya” and the bouncy, funk track, “Rock With You.”

What you hear is almost four decades as a band, is something that they will always remember. The Maxx has never strayed from the dreams they had as high schoolers perfecting their craft in garages and band rooms. “Ironically, we’re doing what we’ve always done, but because the trends change, now what we’re doing is new,” says Whittaker. “Bringing back that classic soul funk; which is perfect for us.”

The Maxx Band is your band for the following – funk, R&B, soul and pop – and a good time!

For more info on the band: http://www.themaxxband.com/

Uncategorized
Soon you will know all about JB…
With a giggle and a saunter….