Angie Aparo is back… 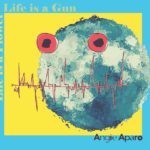 Life After Stroke Is Beautiful For

He Takes Aim And Blooms With

Life Is A Flower, Life Is A Gun

“Every song has a memory; every song has the ability to make or break your heart, shut down the heart, and open the eyes.” ― Andy Warhol

His powerful words, vocals, instruments, effects are wrapped up into musical art films. Angie is an audio scientist with sounds, both modern and traditional, then mixing technology that we use every day, like Siri to create his songs. What has come out of him is a gutted-out heart, a re-wired brain, and motor skills that are sharper than a butcher knife in the kitchen.

The collection of new songs Life Is A Flower, Life Is A Gun almost didn’t make it, to tape, to the recording microphone, to the stage.

It’s been a while since the musical world has heard from Angie Aparo, his last album was released almost eight years ago. You might know him from his songs, being covered by Faith Hill, Tim McGraw, Big & Rich, Edwin McCain, Sheila E. and Miley Cyrus. You might go to his solo shows. If you have the CD, THE AMERICAN; you heard greatness, if you saw him live; you saw genius, and now this album. Life Is A Flower, Life Is A Gun, (Schoolkids Records) is aptly titled for someone who has gone through several life-changing events.

“There is nothing so stable as change.” –  Bob Dylan

So, to catch you up we have to go backward with one-day in April 2016; one day he will never forget.

Angie suffered a stroke at the age of 55:

Knowing I was a singer-songwriter, my neurologist asked me to put a melody to everything I see in the world, outside, in my house, at the grocery store, anything, anywhere. Due to his recommendation, I believe my use of melody helped me reprogram my brain. Although I still experience a lapse of memory now and then, I feel I can operate normally in life. And I’ve learned how to sing my songs again!”

At Decatur’s famed acoustic room Eddie’s Attic, in April 2016, just a few months after the incident, Angie told the engaged listeners he might have some trouble with his songs. A few minutes later, he admitted he had suffered a stroke. He wasn’t looking for a pity party; he was looking for his place in the world. He didn’t waiver, didn’t stop, and didn’t complain. The audience gave him thumbs up, and he sang on.

“I wish myself to be a prop, if anything, for my songs. I want to be the vehicle for my songs. I would like to color the material with an as much visual expression as is necessary for that song.” – David Bowie

During this time of healing, while Angie was recovering from his stroke he decided to create as much art – musically and visually – as he could not knowing what the next day would bring. He collected sounds, effects and melodies like some people collect stamps. From songs, like “Churchbells VS Television” to “Little Black Dress” to “Bicycle Kings” to “Punk Rock Girl” he runs the gamut of emotions and subjects. Even attacks a heartbreak from his last marriage with “The Science Of Goodbye” to comprehend what happened.

Created solely by Angie himself, using computer loops, traditional instruments, and the voice of Siri give his songs a visual texture to the audio landscape capture in his mind. Angie is an audio scientist when it comes to his art form, and that’s why he’s so exemplary.

Signed to Arista by Clive Davis in 2000, he tells a story about one of his appointments with the legendary industry head. He couldn’t remember “Cry” for it had been a while so he called home for the words and he sat down at the hotel lobby piano to figure it out. He went into the office meeting with the song, and all Mr. Davis wanted to know was; what were the words to the song. So Angie read the words and for a moment, Angie had Clive Davis in the palm of his hand.

Critics and fans received the album The American, produced by Matt Serletic (Matchbox Twenty, Collective Soul) with delight and craving for more. He released eight more and continued to tour. He wrote songs with the duo Big & Rich, co-wrote a song for percussionist Shelia E. and graced and shared stages with Faith Hill, Zac Brown, Matchbox Twenty and Edwin McCain. He is a master storyteller and a live act that is hard to follow.

“Not since Dylan, has an artist crafted lyrics so deeply steeped in metaphor and meaning that they can only be called “poetry” – Anti-music

In the summer of 2017, Angie was interviewed by Ellen Eldridge of the Atlanta Journal-Constitution for their Sunday Edition: Personal Journey section to talk about his recovery, this was an in-depth article that explained a lot of the mental and physical struggles that required a lot of determination so he could fully recover. Here’s the link to the story: http://specials.myajc.com/angie-aparo/

In October 2017, he was a speaker at the National Stroke Association’s Comeback Trail 5K Run held at the Old Fourth Park in Atlanta, GA. He performed “Bicycle Kings” from this new album as well as one of his first radio hits, “Spaceship.” In their winter 2018 issue, he will grace the cover their magazine along with his story.

“As a stroke survivor, it’s important to me to raise awareness about stroke, which can happen to anyone at any time,” said Aparo. “It wasn’t always easy, but I came back strong from a stroke and returned to my music career with a newfound appreciation for life. Music saved me, and now I want to share my gift with others by playing a few songs at the National Stroke Association’s Comeback Trail 5K in my, hometown.”

While healing from a stroke is a lifelong process, Angie continues to embrace his journey with curiosity and education:

“I guess God uses a medical intervention to get your attention sometimes, Angie said, I felt like the stroke ‘shorted out’ my brain, I was forced into a meditative silence. It’s a strange kind of blessing that’s for sure… but aren’t they all?”

It was this meditative silence, which led Angie to Japan, to begin his project Searching for Guru, a video diary of an interfaith view of God and the power of music.

“It’s funny, I’ve traveled the world searching for gurus, but I found instant enlightenment in a small bar in Tokyo. I walked in, the bartender said, ‘You must be from America, what do you do?’ I said ‘I’m a songwriter.’ Two shots of Jager later, I was playing ‘Cry’ for this Japanese bar owner, who was a huge Faith Hill country fan.”

The power of music is all around us.

As Life Is A Flower, Life Is A Gun opens up we have an artist that had to reboot, restart and relearn. Angie has regained, released and in the process has been reborn since that mind-shattering day. But if anything, we all can learn from him. For as a society we tend to give sympathy out to those have fallen ill, suffered or in deep pain with their minds or bodies. And Angie does want your hugs but he also you wants you to take his determination and inhale it for yourself.

The album is the story of the spiritual and emotion war and the possible victory of love and silence:

Churchbells VS The Television – (worldliness vs holiness)

Life Is A Flower; Life Is A Gun – (anger vs Jesus)

The Square Boy – (gender vs spirit)

Jazz – (victory of love – for my ex-wife and her father)

WTF – (people vs the government)

John The Baptist (the blessing of Stroke = forced silence to receive)

Lions On The Sand (love for my best friend)

The Science of Goodbye (love vs commitment)

Bicycle Kings – (Innocence before the war)

Punk Rock Girl – Ramone (my ticket to the war)

Check out this inside look at how Angie created his sound with Siri: https://youtu.be/Q0Z5k7VQIaU

For more information on Angie visit his website: www.angieaparo.co

Schoolkids Records is one of the longest-running independent retail record stores in the country along with a great label – for more info: http://www.schoolkidsrecords.com