James House says “…come on into my kitchen…” 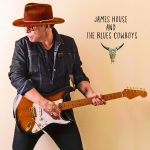 “There is a vulnerable truth in James House’s songwriting that is very humbling for any writer to experience and that voice!!! That voice is pure emotion heartbreaking and soul lifting at the same time. I love you, James. Congrats on another great one!” – Beth Hart

The beautiful mind of House writes words and lines that will turn you inside out: “Once there was this spider in my bed, I got caught up in her web, of love and lies”

Nashville-based singer-songwriter James House set to release an album of Blues, Americana, and rock to his fans that have been begging him to do for a long time. His love of the Blues has always been an undercurrent tone to his tunes. The self-titled album will come out on August 3 to worldwide audiences, and this time, James is singing from his gut.

Never was one to sit on the fence” – “Jail House Blues”

Created by James in his studio, Cabin In The Woods located in a rural area of Nashville, he called on some hot shot musicians with great pedigrees to help: Todd Sharp (Rod Stewart, Hall & Oates), Mike Bradford (Uncle Kracker), Will Kimbrough and Kenny Greenberg (an A-list Nashville studio guitarist). He tapped into his vault of songs that fit the sound of the ever-evolving songwriter and pushed the record button, letting the magic happen organically.

Songs from this album are swinging, haunting and sometimes hopeful with House pulling out all the stops by using his creative influences like John Lee Hooker, William Faulkner and the wild violin strings of Eamon McGlouglin (The Greencards, John Paul White, and Ashley Monroe) to provide some fire. You can hear how his craft intersects with his art with songs like, “Long Way Down” that recall John Lee Hooker and “Well Ran Dry” – that asks the question, what if William Faulkner wrote a blues song?

At the holy water bowl

House, a sought-after collaborator with Joe Bonamassa, Beth Hart, Martina McBride and Dwight Yoakum has found himself in some of the best musical circles one could be in. James has a way with the art of story-telling while delivering it with a good cry, moan and groan.

Hounds of hell are barking

right outside my door

and every time I feed em

they come back for more – “Long Way Down”

House has recently been behind the scenes shaping the sound of modern Blues music with his sophisticated songwriting. As a singer, House’s voice has that rough soul ache that is his secret weapon as a writer and performer. As a guitar player, he lets his Fender do the talking as the riffs fly off his fingers providing a backdrop to his melodies.

His songs have been nominated for Grammys, Country Music Association Awards, Academy of Country Music Awards and climbed their way to the top of the charts. Some songs have been game-changers for young 6-string slingers such as British Blues artist Joanne Shaw Taylor to the more developed voices of Beth Hart and Martina McBride. One can’t go wrong with a House song.

James might not be a household name, but his songs are. Throughout his years with his performance rights organization group, BMI, he has reached a 7 million and counting radio airplay spins to date for three of his songs:  “A Broken Wing” and “Ain’t That Lonely Yet” are at 3 million radio airplay awards each and  “In A Week, Or Two”  is at 2 Million.  James has set his sights on changing the Blues music world, and he does it with style. House co/wrote eight songs on with Joe on (Bonamassa’s  Different Shades Of Blue  (reached: #8 Billboard Album Chart #1 Blues and Rock) and seven songs on Blues Of Desperation  (reached: #5  Billboard Album Chart  #1 Blues/Rock ).

Blues guitar hotshot Joe Bonamassa says this about his partner in crime:

“James House is one of the premier songwriting and musical talents in the world today. His ability to flourish in so many different genres is a testament to his lifelong dedication to his songwriting craft.  Plus, he is one helluva singer.  On a personal note, many of my career-defining songs have been written with James.  He is very good at taking my wacky ideas and turning them into real songs. “

A native of Northern California and now a long-time resident of Nashville, James was raised on music from his families’ ranch in Oregon and the Sacramento Delta where he and friends would often head to Fillmore West in San Francisco to hear blues greats like Paul Butterfield and BB King. The talented songwriter moved to Los Angeles after high school graduation where he honed his craft working on film soundtracks, various studio sessions and playing around town where he ended up signing with first Warner/Curb and later Atlantic Records where he recorded with Steely Dan producer Gary Katz.

His live shows are filled with passion and grit, and for this album, he has handpicked some new talent. His touring line up will include two unique musicians from Lafayette, LA that he met during a songwriter’s event named, Smoov Ras and Roddie Romero:

“Roddie Romero is a Lafayette, LA guitar playing, singing legend and Smoove Ras is a drummer/ percussionist/ vocalist who people are just now discovering and also from Lafayette. They both have that innate sense of music and both are committed to their craft.  From the moment we got together to write and jam the harmonies were spot on, and it was like we’d been playing together for years.  They are The Blues Cowboys.” – James House

Something’s in the water

James House never decided to write a song called “What Side Of The River Are You On?” when he went to the Buddy Holly Songwriting Retreat this past spring. It was made for him. Decisions. Some are hard, and some are easy. Some are life-changing, and some are life-threatening.

This one; was both.

The song came from several elements that absorbed in his subconscious, eating at a crawfish boil along the river in Lafayette, LA, listening to Mary Gauthier sing Woody Guthrie’s “This Land Is Your Land” and a songwriting meeting with two exquisite musicians: Roddie Romero and Smoov Ras – that changed his musical vision for The Blues Cowboys.

James’ approach to songwriter has always stood alone as he chooses his words, notes, and chords carefully to construct a song and have it stand the test of time. From Music Row to Santa Monica Blvd and now eyeing Beale Street, James House has always had the Blues one way or another.