Carolyn Gaines pays homage with new album! Out on 8/2 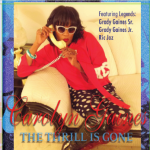 With The Thrill Is Gone Out on August 2

Last year, fans and critics fell in love with Carolyn Gaines’ debut album, Beware Of My Dog, this year, she continues to sing her backside off, like Ma Rainey, Billie Holiday, Etta James,  Bessie Smith, and Diana Ross on her new album, The Thrill Is Gone via Polka Dot Records out on August 2, 2019. The collection is colorful and filled with snarls, sneers, growls, and guts all sung with a smile on the singer’s face. Gaines produced the album herself, and she recorded at Leon Haywood’s (“It’s Got To Be Mellow,” Guitar Slim, “Bad Mama Jama”) Sunnyside Studio in Los Angeles, CA. The studio was on the verge of closing, and she had one month to do it, so Carolyn called on some legendary musicians and Family to get the job done. So, this album, The Thrill Is Gone was one of the last recordings to come out of the studio.

Special guests on the album include Ric Jaz; blues guitarist for Buddy Guy, her uncle Grady Gaines, Sr (Little Richard, Gatemouth Brown, Sam Cooke, Jimi Hendrix) and his son Grady Gaines, Jr (Grady Gaines, Sr band) both on saxophone along with Gino Baronelli, “The Blues Don” on guitars. Other players on the album are Charles Sherman on piano, Moe Bleek on organ, Glen Doll on harmonica and upright bass; duties were cover by both Dale Atkins and Paul Kennedy.

Having an album with no drums and very sparse instrumentation allows a lot of space around the notes so you can hear the emotion in Gaines’ voice. She opens with the Buddy Guy classic lines; “Damn Right I Got The Blues – from my head down to my shoes,” with the same real raw vocal prowess as Guy still conveys. Buddy Guy has always been an artist that Carolyn looks up for inspiration with his long-standing and celebrated career. Her cover of “Guess What” she confirms in song, that she won’t let her man walk all over her, “Your house all messed up, baby, and your line don’t sound true, I smell a rat, cause it stinks all over you, say” (From Buddy Guy’s album, Living Proof, 2010).

On Ma Rainey’s tune, “Deep Moanin’ Blues” (1928) her uncle Grady Gaines, Sr and her cousin, Grady Gaines, Jr wail away on the saxophone while she sings deep from her bottom of her soul to get that lioness feeling out of her, [they] “just rock my socks!” laughs the blues singer. Carolyn’s voice has the swagger to it, and the attitude in her stylings and delivery is perfectly perfect like her father Roy Gaines, Buddy Guy, Ma Rainey, Bobby “Blue “Bland, The Rolling Stones’ Mick Jagger. Carolyn’s voice will remind you of the blues pioneer, Big Mama Thornton – a raspy, seductive sneer.

Side story: Leon Levy, a longtime mentor of her Carolyn’s played her music for the legendary Queen of Rock, Tina Turner and she said that her voice sounded like Big Mama Thornton.

“A celebration of the distinctive vocal tone that has a roughness that is never smoothed into something that it isn’t; her vocals are full of warmth and expression. “– Blues Doodles (UK)

Carolyn digs way down with Etta James’ “I’d Rather Go Blind,” and that’s when she starts to blend tears with her vocals as she begs her man to reconsider their love. Her vocals are with mixed emotions met with the sparse sounds of her cousin Grady Gaines, Jr on saxophone with guitar, bass, and organ, so her vocals stand out.  On the halfway mark of The Thrill Is Gone – her version of Muddy Waters’ “I Got My Mojo Working” is fun, sassy and her vocals are confident as Muddy Waters with Gino Baronelli’s hopping guitar licks matching her phrasing. Carolyn’s voice sounds like honey on Otis Redding’s “Dreams To Remember” her bittersweet melody of heartbreak with Gino’s chiming chords behind her, but it was Buddy Guy’s version that drew her to the song. The lonesome harmonica cries behind her voice, on Bobby “Blue” Bland’s ultimate heartache song, “Stormy Monday” and she comes back rocking out to Robert Johnson’s “Sweet Home Chicago” as she sings playfully with her uncle, Grady Gaines, Sr, on saxophone.

These songs on this album were carefully chosen by Carolyn, for she’s known and loved them since was a child from modern-day of Guy, and rockers like Jim Hendrix’s: her rock n’ roll, bluesy vocals on “Hey Joe” and “Red House” are extraordinary. She brings energy and groove to the classics. It’s the teary-eyed cover of Billie Holiday’s classic “God Bless The Child,” that her couin Grady Gaines, Jr on saxophone and Ric Jaz Buddy Guy’s guitarist both strives to recreate a moment as if Billie Holiday was in the studio with them at Sunnyside. That song has always been a dream of hers to sing, taking cues from Lady Day and the singer who portrayed her on the silver screen, Diana Ross. “I always wanted to sing this song like Diana Ross, and I would dream of how I would combine it with the gracefulness of Billie,” Carolyn gushes.

The album closes with “The Thrill Is Gone,” a B.B. King song written by Roy Hawkins and Rick Darnell in 1951 became a mega-hit for B.B. back in 1969. Carolyn pays homage to him as being one of her very favorite blues singers and performers. Along with her uncle Grady Gaines, Sr’s soulful saxophone and Buddy Guy’s guitarist Ric Jaz, they “bestowed raw blazing sunshine!” Carolyn shouts after hearing the final recording.

Some of this music history with Carolyn started before she was even born. The singer was born in Houston, TX and moved out to the Los Angeles area with her father as a teenager only to fall in love with blues.  Roy Gaines’ career started 60 years ago, with his band in Texas called The Jazz Crusaders, and he has released 18 albums, played with many blues and jazz greats, Bobby “Blue” Bland, Billie Holiday and Diana Ross. He played with the great Lady Day when he was just 21 at Carnegie Hall!

Her father’s love of the blues and jazz carried over to his daughter who developed a creative way, 20 years ago, to teach the American Blues genre, with her Blues School Programs by going into schools to teach children of all ages. She has the support of her father for this endeavor and Roy Gaines along with other artists Ike Turner, Guitar Shorty, Buddy Guy, Shemekia Copeland, Etta James, Keb MO’, Herbie Hancock and B.B. King to appear at various events and show examples of their beloved genre. Roy Gaines’ was a legendary teacher of the blues. She was able to cover a lot of ground through the Los Angeles Unified Schools District; both Pasadena and Hawthorne from elementary to high school, homes for the elderly, and Roger Naber’s Legendary Rhythm and Blues Cruise. As of today, Carolyn has taught over three million people the blues!

”But pedigree will only get you so far. It’s heart, feeling talent that makes a master musician, and make no mistake. Carolyn Gaines is the real deal.” – Blues Matters! UK

Carolyn Gaines album, The Thrill Is Gone will sure to be another hit with fans and critics alike, and she can’t wait to get it out;  “I just wanted to cross over from these blues greats’ beautiful, “Bluesy” historical sounds and put my style on these classics! And I hope others will enjoy them as much as I do,” exclaims Gaines. So, this album, an homage, is her way to “Keep the Blues Alive!”

The Thrill Is Gone – songs and original artists with year