A little shuffle here, with a cry, moan and groan on the side… 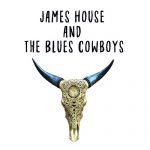 JAMES HOUSE AND THE BLUES COWBOYS

NEW ALBUM OUT THIS SUMMER

with a good cry, moan and groan

Nashville based singer-songwriter James House releases an album of Blues, Americana, and rock to his fans that have been begging him to do so. His love of the Blues has always been an undercurrent tone to his tunes.

Created by James in his studio, Cabin In The Woods, located in a rural area of Nashville, he called on some hot shot musicians with great pedigrees; Todd Sharp (Rod Stewart, Hall & Oates), Mike Bradford (Uncle Kracker), Kenny Greenberg (an A-list Nashville studio guitarist). He tapped into his vault of songs – that fit the sound of the ever-evolving songwriter and pushed the record button, letting the magic happen organically.

House, a sought-after collaborator with Joe Bonamassa, Beth Hart, Martina McBride and Dwight Yoakum has found himself in some of the best musical circles one could be in. James has a way with the art of story-telling while delivering it with a good cry, moan and groan.

House has been behind the scenes helping shape the sound of modern Blues music with his distinct songwriting. As a singer, House’s voice has that rough soul that is his secret weapon as a writer and performer. As a guitar player, he lets his Fender do the talking. His songs have been nominated for Grammys, Country Music Association Awards, Academy of Country Music Awards and climbed their way to the top of the charts. Some songs have been game-changers for young 6-string slingers such as Joanne Shaw Taylor to the more developed voices of Beth Hart and Martina McBride. One can’t go wrong with a House song.

James House, co-writer with Blues guitar hotshot Joe Bonamassa on his chart-topping Number 1 CDs Blues of Desperation and Different Shades of Blue and his current 2018 release, Black Coffee say this about his partner in crime:

“James House is one of the premier songwriting and musical talents in the world today. His ability to flourish in so many different genres is a testament to his lifelong dedication to his songwriting craft. Plus, he is one helluva singer.  On a personal note, many of my career-defining songs have been written with James.  He is very good at taking my wacky ideas and turning them into real songs.“ – Joe Bonamassa

From Music Row to Santa Monica Blvd and now eyeing Beale Street, James House has always had the Blues one way or another.

Stay glued, tuned and keep your ears and eyes open for more to come:

IF YOU ARE IN TOWN:

Rodd Bland And The Members Only Band at 8:15PM

Uncategorized
Hey man – get in here it’s hopping!
This is gonna be great…