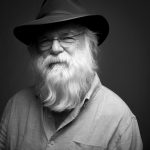 NASHVILLE, TN: A Celebration of Life for David Olney, the widely acclaimed and wholly unique singer-songwriter, is set for Monday, March 9, at the Belcourt Theatre in Nashville, TN. Doors open at 6 p.m., and the event will begin at 6:30 p.m. sharp.

The event for Olney, who died January 18 during a performance in Florida, is free and open to the public. It will include musical and spoken segments in recognition of his life as a husband, father, brother, and friend, as well as the author and performer of brilliant works, including “Roses,” “1917,” “Deeper Well,” and hundreds of others.

A Nashville resident since 1973, Olney wrote songs, recorded and performed by artists such as Emmylou Harris, Linda Ronstadt, Del McCoury, Steve Young, and Steve Earle, as well as released 20 plus solo albums and toured extensively worldwide.

To peers such as Townes Van Zandt and Guy Clark, and a whole generation of younger followers, Olney served as a model of inspiration, artistry, generosity, and good humor.

News of Olney’s death left musicians and listeners across the globe despondent, but the Belcourt event will be about the triumph of a one-of-a-kind man who lived on his own terms yet displayed remarkable empathy and tenderness to others.