DOG EAR YOUR APP! Andy May Comes Back To MerleFest

“Andy has a remarkable ability to make kids feel welcomed and valued as a person and [as a] musical contributor.” – Sara Watkins 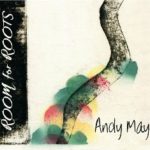 Andy May comes back to MerleFest once again to perform solo and to present his Acoustic Kids Showcases over the April 27-30 weekend. His critically acclaimed Acoustic Kids (alumni include Sara Watkins, Chris Thile, and Sean Watkins of Nickel Creek) will amaze you with their developing talents and infectious enthusiasm. May is an energetic heartwarming storyteller who has mesmerized audiences with his pickin’ skills, voice, and songs over his 50-year-long career. At this year’s festival, he will play some new songs from his 2016 release, “Room for Roots,” that had great reception from critics, radio, and fans alike.

Andy’s shows are filled with story-telling about life, love, and some mishaps sprinkled with good humor. Pull up your chair, a blanket or just stand there for his shows at MerleFest!

For publicity concerns during the Festival and beyond: Jill Kettles – Miss Jill PR – T- 404-213-8542 and Email: jill@missjillpr.com – www.missjillpr.com

In a career spanning five decades and three regions of the nation, Andy May makes remarkable music which can be exuberant, thoughtful, funny or bittersweet – but it’s always a joyful experience. His originality and optimism combined with his love and respect for America’s musical roots shine through his work.

Mix the eclecticism of Bob Dylan, the mellowness of Don Williams, and the fire of Bill Monroe and you might come close to a description of Andy’s music. He has been called a “troubadour of life,” an “Americana music pioneer,” a “master of traditional American music styles,” and an “upbeat roots rocker.” Through the years, he has appeared with artists as diverse as Pete Seeger, Merle Haggard, Nickel Creek, Brownie McGhee & Sonny Terry, and John Hartford.

By his 20th birthday, Andy had played Carnegie Hall and won the Grand Championship on guitar at the legendary Union Grove, NC, Fiddler’s Convention. As a teen in New York City in the late 1960’s, he often performed concerts for Izzy Young at his legendary Folklore Center. It was Izzy who gave Bob Dylan his first-ever concert in 1961 and who gave Andy his first concert as a songwriter in 1970. During this time, Andy also played the Metropolitan Museum of Art and the Cooper Union, frequently appeared on WBAI-FM and worked with Brill Building songwriter and producer Artie Resnick (“Under the Boardwalk,” “Good Lovin’”). All the while, he studied painting and fine arts at the High School of Music and Art – where he was honored with the Art Chairman’s Award – and the School of Visual Arts – where he studied with twentieth-century painting master, Chuck Close.

In 1986, Andy moved to Fort Collins, Colorado, where – in addition to performing – he became an active recording producer and educator. It was also there that Andy met and began co-writing with his wife, Lauren.

Andy started and runs the record label and production company, Swift River Music, which has become the home label for other independent artists as well as Andy. In 2007, he agreed to release an album on Swift River by the legendary bluegrass mandolinist, Everett Lilly, whose music he had admired for many years. Believing in the project, Andy dived in with post-production polishing, and Lauren took on the liner notes and artwork. The next year, the IBMA honored Swift River Music and Everett Lilly and Everybody and Their Brother with their 2008 “Recorded Event of the Year.”

Andy has had songs on Juno Award, Gemini Award and Apollo Award-nominated albums and T.V. shows and T.V. documentaries. He is also a yearly performer and educator at major festivals like Walnut Valley Festival and MerleFest, where he conducts his beloved Acoustic Kids Showcases. Through this non-competitive event, he has provided performance opportunities for hundreds of young musicians at music festivals for over two decades.

Based out of Nashville, Tennessee, since 1996, Andy has been a regular workshop contributor to the Country Music Hall of Fame and Museum and continues to be an in-demand educator, performer, and recording producer.