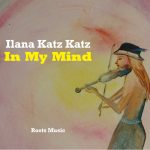 New Album In My Mind

Plucked out of a crowd to play with Ronnie Earl, Ilana’s blues-infused fiddling spans to bend genres, taking listeners back and forward in time. The legendary guitarist called her:

Ilana Katz Katz’s signature blues and roots fiddling, alongside her distinctive scat singing with the fiddle, emerge stronger than ever on her latest record, In My Mind, out on October 8, 2021. Her beautifully seasoned vocals evoke the essences of Rickie Lee Jones, Alison Krauss, and hints of Joni Mitchell. Her songwriting skills and refreshing musicality are showcased with ten originals and one traditional. Produced by Ghost Town Blues Band’s Matt Isbell, it’s a successful catapult to greater musical arenas for Katz.  She’s joined on many tracks by Johnny Burgin and his band. The music is even wrapped in Ilana’s self-portrait watercolors on front/back covers. The front portrait shows her fiddling, and the back painting literally shows the fun and spunky music notes coming out of her mind.

In My Mind was produced by Matt Isbell, whom she met in 2016 during the International Blues Challenge week on Beale Street in Memphis. Matt is the mastermind band leader for the international award-winning Ghost Town Blues Band. These two creative souls developed a mutual respect and musician comradery at the get-go. Ilana, who guests on his band’s latest release, which debuted at #1 on the Billboard Blues Charts, gushes over him: “I think of Matt as my wiser, younger, Memphis music brother. He was my first choice to produce this record.”

In My Mind hatched in 2018 when Johnny Burgin’s band was staying at Ilana’s home; they would jam after hours on their Northeast tour, which sparked the inspiration to record. On a whim, they spent one day in a Rhode Island studio, laying the blueprints for much of this record. (Stephen Dougherty is on drums and Chris Matheos is on bass.)  With all Ilana’s commitments, she wasn’t able to finish the record until early 2020, when she went to Mississippi to polish the earlier tracks.  She added a few new tracks with Isbell on guitar.  The final track, “If,” – was entirely recorded by Ilana in her closet during the initial COVID-19 pandemic lockdown.

“If” is a powerful song that addresses our questioning minds and hearts with Katz’s underlying message of hope for people to find commonality and come together. With Katz’s lyrics like “I’m gonna ask you again, If God is a woman, would you listen to what she say, or do you need a man to kneel and pray,” – it recalls Collin Raye’s 1995 country hit “What if Jesus Came Back Like That?”

Other themes covered on Katz’s album include love and acceptance on the title track, “In My Mind,” feminism on “Woman, Play the Blues,” and Ilana’s reaction to the real-life tragedy in “Nine Souls” about the Charleston, SC church killings in 2015.  She also takes us to the mindset of being honest with ourselves when relationships have run their course in the humorously tinged “Time To Go.” She also shares her faith in “Won’t Pass Me By” and gets playful on “Downtown With The Devil” – with the devil as a woman. Ilana’s sweet, calm voice is always compelling – but her emotional vocal range goes from vulnerability all the way to feistiness, depending on the lyric. Through it all, her musical expression is confident and purposeful.

“Ilana Katz Katz is a truly unique artist, from her two-Katz moniker to her deft fiddle playing culled from the deep-soul roots to the blues and rural folk traditions. Then topped off by her unpretentious, almost otherworldly voice,” says Steve Morse, veteran music writer (28-years on staff at the Boston Globe.)

Ilana Katz Katz is a classically trained violinist who always wanted to play the blues. She gained improvisational expertise via Appalachian music festivals steeped in the old-time fiddle traditions. Her influences range from Rickie Lee Jones and Joni Mitchell to the first bluesman she ever heard – John Lee Hooker. All are trailblazers for Ilana and indicators of why her music spans the gamut of the large roots music umbrella. She’s grateful to be welcomed to so many roots music experiences: “I share music with joy and am honored to be invited to play with so many special musicians.”

She’s performed and recorded songs with a who’s who in the Blues world as a singer and fiddler, including Ronnie Earl, Bob Margolin, Kingfish, and Shemekia Copeland, to name a few.  Her distinctive musical sound turned her into a sought-after musician as a solo performer and band member. “It’s a huge compliment to be invited to collaborate in so many musical arenas and genres,” Ilana says.

She’s been a subway busker since 2008 and still loves performing there whenever she’s not on the road. Whether she is “below ground” in the subway or “above ground” high on the festival stage, she conveys soulful intimacy with each syllable she sings and each tone on her fiddle. With Ronnie Earl on much of her debut record, he showcased her on many shows early on.

Give In My Mind a listen, and you’ll travel a musical whirlwind of emotions. Sometimes a trip back into our minds is all we need to getaway.

Uncategorized
Turn that steering wheel sharply to the left…. ahhh now you got it…
Next Post