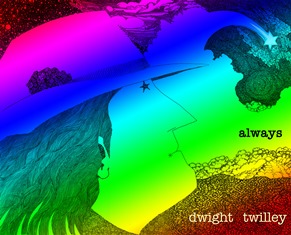 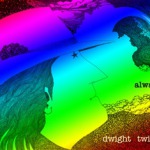 On November 18 Dwight Twilley Gives Fans What They Always Want – A New Album!

Complete with original drawing rendered by the power pop legend himself

Atlanta, GA – Big Oak Recording artist, Dwight Twilley eyes November 18th as a release date for Always, his first album, since 2011 when he released the critically acclaimed, Soundtrack. Soundtrack was produced by Dwight and his wife, Jan and they again have created a masterpiece. This is the usual big Twilley sound with big songs and that great voice fans have known since the 1970s all in one place. Always was self-made at his 48 track studio in Tulsa, Oklahoma, with a group of musical guests including; Steve Allen and Ron Flynt (20/20), Mitch Easter, Roger Lynn, Tommy Keene, Bill Pitcock IV, Susan Cowsill and many more.

When Dwight met drummer Phil Seymour at a theater, to watch the Beatles film, Hard Days Night, they didn’t expect that they would go on to be power-pop legends. They found kindred spirits with each other because they loved music and immediately formed the Oister. Dwight wrote the songs, Phil kept the beat. The group, now with guitarist Bill Pitcock IV recorded over a hundred songs over the years, some released and some not. The first time they went to the Church Studio in Tulsa, OK, they recorded “I’m On Fire”, which went on to become a top 20 hit record in 1975.

The Dwight Twilley Band signed to Shelter Records (co-owned by fellow Tulsa native Leon Russell). Shelter was eventually bought out by ABC Records. The buy-out led to the introduction of label mate, Tom Petty. The band was recording the revered first album called Sincerely and Tom provided some great background vocals for the album. During the 1970s they catapulted to mainstream radio and press with constant touring and promoting.  They appeared on American Bandstand, they toured with big name acts and were playing to adoring fans, as they trekked across the world. Later in 1984 Petty added vocals to Twilley’s Hit song “Girls.”

1992 was a big year for Dwight when his song, “Why You Wanna Break My Heart” was a part of the movie soundtrack to Wayne’s World that sold millions and is now considered a classic film.

Dwight is always creating new music, but was honored to have his 1977 song, “Lookin’ For the Magic,”first prominently featured in the horror film “You’re Next” – another major motion picture. The song “Lookin’ for the Magic” hailed from the 1977 DTB album “Twilley Don’t Mind” that featured Tom Petty as a guest performer.

From the opening of the first song, with “Always” to the growling on “When The Jukebox Dies” to the waltzing love song, “Fools Like Me”; Dwight takes you on a journey and the listener is hooked. Using words that are plain; sound fancy and elaborate when set to Twilley music. The haunting beat of “A Million Miles Wide”, recalls either a love or the world that isn’t paying attention.  His music has staying power and is timeless after all these years.

Dwight has always been a visual person with his music and with this album art, he wanted to add a little something more than just him. A pen and ink drawing with eye catching colors, he brings a little more into it.  It’s all inclusive to make the album listening party worth having.

“… a pop version of John Fogerty, Twilley is his own kind of roots-rocker — for whom the continuum in guitar-based rock from the 1950s to the present remains seamless.” – NPR

The Twilley way is to give it his all, his most creative self at that moment to his die-hard fans. They have been with him from the start at shows, watching him on TV and most of buying his albums. In preparation for his Green Blimp album 2010, he utilized Kickstarter to gather thousands of dollars for promotional needs, proving once again, he didn’t need a label – that through fans; all things are possible.

So with that Dwight presents, Always a collection of timeless power pop, eloquently produced for you the fan.

“I’m very proud of Always. It just took a little help from my friends.” – Dwight Twilley

For a publicity photo: http://missjillpr.com/wp-content/uploads/2014/11/Universal-Crop.jpg