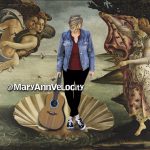 Five songs that capture the essence of the human being: spiritual, physical, and intimate

Velocity means the speed of something in any given direction, and it took a while for songwriter/musical artist Mary Ann V to arrive with her latest EP, @MaryAnnVelocity.

Now it’s set for release on October 18, 2019 (digital-only) via her label, MAV Records. Mary Ann produced and recorded the music for this EP at Escape Velocity in Santa Monica, California (her own studio) using various techniques from traditional to modern. She recorded her vocals at 4th Street Recording (Nelly Furtado, No Doubt, The Beach Boys), also in Santa Monica, with Andreas Kvinge Sandnes, acclaimed mix engineer, musician, and friend. This in-depth musical endeavor offers sounds of folk, pop, hip-hop, rap, and indie/rock-n-roll elements.

The complexity of Mary Ann’s music comes from her background as an acoustic songwriter by nature, woven into a musical fabric that allows her to stretch the songs into new realms. Using electronic sounds and loops which compliment her voice, Mary Ann’s music may remind listeners of artists as diverse as Billie Eilish, Annie Lennox, Jewel, and Joni Mitchell. Paired with her thought-provoking lyrics, she offers a full and robust musical experience. With the release of @MaryAnnVelocity, Mary Ann lands with her message of love.

“When we box ourselves into labels according to mistaken notions about humanity and sexuality, we harm ourselves, each other, and our world.” – Mary Ann

When she took an online recording class at the respected Berklee College of Music, Mary Ann didn’t realize just how much she would get out of it. Having intended to take one class and then record her songs, that one class yielded “Who Made It Be That Way” which features John Mason on bass. John is a nationally recognized musician as well as a Berklee student who recorded the part while on a layover during a tour. The results of that class inspired Mary Ann to apply to Berklee’s online degree program. Thanks to the encouragement of her professors and her classmates, Mary Ann has now completed this EP, and a music video for “Who Made It Be That Way.” Other musical guests on this record include Denny Croy (upright bass), James Thompson (saxophone and clarinet), and Andreas Kvinge Sandnes (bass guitar and various electronic instruments).

Each song has a cinematic delivery:  Tackling both life and death situations; Mary Ann’s poetic viewpoints convey many emotions, including love, frustration, patience, and hope – the basic elements that make up humankind.

“It’s simply common sense that we’d all like to avoid accidents and disasters. But sometimes, the universe has other plans. The point is to be in the here-and-now in our lifetimes, connect in a loving spirit, and be safe on the road.” – Mary Ann

Mary Ann was born and raised in a working-class family in the suburbs of Cleveland, Ohio. As a Catholic girl who attended public school, she found refuge from suburbia in music, first by listening to it and later by picking up the guitar and beginning to write.

“As a child, I used to sing into my jump rope handle in my backyard and swing the rope around the way Cher did during her performances on the Sonny & Cher show. I knew then that I wanted to be a performer.”

Her early influences come from the household music collection: Tom Jones, Frank Sinatra, Simon & Garfunkel, Sonny & Cher, John Denver, Neil Diamond, Johnny Cash, Dolly Parton, and The Sound of Music and West Side Story films and soundtracks. When her sister got a Suzi Quatro album from a friend as a birthday gift, she gave it to Mary Ann. “That was my first introduction to a girl playing rock music. After that, I got all of Suzi Quatro’s albums!” laughs Mary Ann. She was a Suzi Q-fanatic!

After graduating high school and leaving the Midwest for California on her own, Mary Ann spent time playing at coffeehouses and other small venues with fellow singer-songwriters. She worked as a non-union electrician for several years. Later, after sustaining an injury, she obtained a paralegal certificate and began her work in legal advocacy. Mary Ann has continued to work in the legal field, primarily in family law, but music has always been her first love.

Mary Ann’s idea for the @MaryAnnVelocity cover art was at first meant to be humorous, yet it truly conveys the spirit of this artist and her music. Shown riding to shore on the scallop shell as Venus did in Sandro Botticelli’s famous painting, Mary Ann arrives on the scene at the only speed at which she can travel—at Mary Ann Velocity—thanks to Sandro Botticelli, graphic artists Scott Hermann and Gary Avrech, and photographer Mari Linville.

Mary Ann will be a guest on Best2Podcast on 10/17 with a Facebook Live session during the actual interview between 5-5:30 PM Pacific Time. Best2Podcast’s Facebook live streaming will be from their page profile: https://www.facebook.com/Best2podcast/ – full podcast interview broadcast is usually within 24 hours of the taping, but we will alert fans via Mary Ann’s Facebook page: https://www.facebook.com/MaryAnnVelocity/