Meet The Tummies – a Brit-pop-rock band that will swing, shimmy and sing into your “Little Blue Heart” 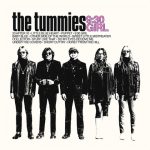 “The new record by The Tummies is a must for 2021! What a fun album! I love the influence of British rock. The Tummies make me smile with every song on this album!!!!” – Tiffany (80’s pop star)

Meet The Tummies: step back in a time when all you wanted was a date on Saturday night, a cool car, and a great place to hang out with your friends. This is what The Tummies are all about; Brit-pop from the 60s like Gerry and The Pacemakers, Manfred Mann, The Rooks, and early Beatles – but modernized.

“… will carry you to Merseybeat heaven…” – Power Popaholic

Based out of Nashville, TN – with couple Dana Radford and Judd Fuller at the helm – the two wrote songs in every room of their Tudor style home in East Nashville, just having fun and being spontaneous. The band’s debut album was recorded in Nashville and produced by the group with Caleb Sherman will be out on February 26, 2021.

The energetic duo has had a love affair with the Beatles since they were young children. Judd explains, “My mother was born and raised in Liverpool, England, and my earliest memories are hearing those old Beatles records through my sister’s bedroom wall. I also remember the lilting sound of my mother’s English accent, tying it all together.” For Dana, it represents her first childhood musical love. She recalls stacks of Beatles 45s were being played in her house and has a fond memory of unwrapping Abbey Road for a Christmas gift in 1969. And, ironically, she was born on the very day the Beatles first landed in America! “The Beatles, and their amazing music, are parts of our DNA! We can’t get enough of the sound!”

The Tummies players read like the Rock ‘n’ Roll Hall of Fame Museum brochure: Judd Fuller on bass and vocals, has played and recorded with Peter Wolf (frontman for J. Geils Band) – Rodney Atkins – Carly Simon – Maggie Rose and 80s Pop Sensation Tiffany. Vocalist Dana Radford has been a sought-out session singer from NYC to Nashville. Sandy Gennaro on drums has recorded and toured with Cyndi Lauper – The Monkees- Joan Jett & The Blackhearts – The Pat Travers Band – Bo Diddley – Johnny Winter. Guitarists Philip Shouse and Jeremy Asbrock on guitars, background vocals, have been involved with solo projects with Gene Simmons and Ace Frehley of KISS and many others.

The group huddled into Cygnus Studios and pushed record – and off they went.

“There’s a little blue tear falling down my face tonight…

that I’m falling apart with a little blue heart, all because of you” – “Little Blue Heart”

The first single, “Little Blue Heart,” captures the musical spirit with the swinging drums, chiming guitars, and a fabulous catchy hook! As the story goes, Judd says, “We were walking on a paved bike trail in the park, and we came upon a spot where someone had spilled some blue paint. One of the spots was, well, shaped like a little blue heart.” The pair’s voices – unison and harmony – melt nicely against the music backdrop.

she walks right by my doorstep

and she always smile,

Songs like “9:30 Girl” are cut from the couple’s daily life but are universal in the message. Vocalist Dana starts her mornings at 9:30 AM every morning. Judd had images of Marla Thomas walking down the streets of NYC in the sitcom “That Girl” from the 1960s. The song is about ‘a self-assured, confident working woman in the 60s walking down the streets of NYC’ was my muse for the song,” laughs Judd.

Other song ideas came from books, dog walks, people in their lives, and of course, observations of life around them; “Other Side of The World,” “Stuff Like That,” and “Honey From The Hill,” which was about Dana’s uncle who was a beekeeper. Judd explains the journey he took with the more tender song inspired by Paul McCartney. “A note on the kitchen’s blackboard, said, “Honey From The Hill” which was a reminder for Dana that her uncle was coming with some sweet honey, seemed like a very spiritual and ethereal phrase,” states Judd as he took it as a song idea and ran with it.

“The Tummies sound so cool on the FM dial with songs like “Sweet Little Mistreater” and “Other Side Of The World” off of their eclectic rocking album “9:30 Girl”! From beginning to end, this album is pure pop bliss.  All killer – no filler.” – Michael McCartney – The Time Machine Radio Show Host – Hawaii – KMNO-FM / KONI-FM / KORL-FM / KQMY-FM / KPMW-FM / KRKH-FM

The Tummies are the epitome of cool, from their sound to their attitude and looks. It’s uncanny how they have morphed themselves into that moment of music that represented something brand new and unheard of to the world’s ears. As Judd says, “We can’t get enough of it!”

Uncategorized
Book your flight with Grant Hill and fly with debut album out on February 19, 2021
With a mega watt smile and her booming voice “”Lee Taylor is a voice to watch!” – William Bell