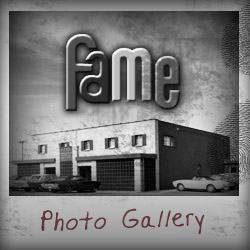 ATLANTA, GA – Ruf Recording artists, Royal Southern Brotherhood, are raising the ante as they roll into the legendary FAME Studios in Muscle Shoals, Alabama. The band has added fiery guitar slingers Bart Walker and Tyrone Vaughan to breathe new energy into their third studio release. The new blood is there to help the venerable Cyril Neville and powerhouse rhythm section Yonrico Scott and Charlie Wooton up the funk while maintaining the blues and rock that has brought Royal Southern Brotherhood (RSB) a growing, worldwide audience.

Click on photo to watch footage from the new line up!

The Brotherhood has toured incessantly over the last four years, canvassing the USA, Europe and Australia. The hard work paid off as RSB watched their fan base and notoriety swell. 2014 also saw RSB win a Blues Music Award for their live DVD, Songs From The Road.

Royal Southern Brotherhood has also been fortunate to have NOLA legend, Cyril Neville, featured in an episode of HBO’s “Sonic Highways” series. This is an 8-episode show that follows the Foo Fighters as they visit different towns they consider to be musically unique and important. Neville was a natural and charismatic fit to talk with Dave Grohl about the New Orleans sound. Their shared love of percussion and rhythms creates a chemistry that serves the show well.

Cyril provided some unique insight and stories about growing up in New Orleans along with Troy “Trombone Shorty” Andrews, telling Dave how Troy got his nickname. Neville detailed how Troy began playing at such a young age that the T-bone was actually taller than Troy. Although he is now a grown man, the nickname “Trombone Shorty” has stayed with him.

With this new spotlight on Cyril, he has been a part of the show’s promotional efforts, by being mentioned in the band’s interviews that have been taken to an international level, CNN, Rolling Stone, Anderson Cooper, CBS’ “60 Minutes”, etc. Dave Grohl has claimed Cyril Neville and NOLA to be his new crush.

As RSB began the task of recording their new CD, they knew they needed a historical, creative location to raise the bar. Choosing FAME was a no-brainer. The studio is located along the Tennessee River in Muscle Shoals, which may seem like a quiet, southern town, but it’s a lightning rod for creativity.

In 1960, FAME Studios opened its doors under the direction of Rick Hall. It wasn’t long before Rick had developed a talented and unique group of session players (and production staff). The sound these boys from northern Alabama created drew the attention of artists such as Wilson Pickett, The Staple Singers, Drive-By Truckers, Lynyrd Skynyrd, Paul Simon and Duane Allman. It’s been told, that Eric Clapton, wanted to know who was that playing on “Hey Jude”, by Pickett and that’s how he found ‘Sky Dog’ (Duane Allman). The place oozes with musical history, vibe and creative juice that will energize RSB’s new endeavor.

Recently, RSB went into a local New Orleans studio to record some demos and work on the vital band chemistry with the new members, guitarists Bart Walker and Tyrone Vaughan. Bart and Tyrone fell into the Brotherhood quickly and added a spark that only change can bring. The results exceeded expectations.

Tyrone hails from blues royalty. When your father is Jimmie Vaughan and your uncle is the vaunted Stevie Ray (who gave Tyrone his first guitar at 5), it can be a blessing and a curse. A lot is expected from Tyrone before he hits the stage, so it takes courage to follow in the family business. Fortunately, Tyrone is unaffected by the adulation for his family, and developed his own gifted style and signature tone. Tyrone cut his own path by working his way up through the Austin (a town drenched in guitar heroes for the uninitiated) club scene in his teens, eventually packing clubs around Texas. Through hard work, studying the masters and a tip or two from the family, Tyrone has developed a soulful voice along with a guitar tone that mixes blues, rock and country. Tyrone’s description of, “in your face,” tone proves accurate when you hear him cut through any mix.

Bart Walker brings his own unique talents to RSB. As a Nashville native, it was natural for Bart to be affected by the country, bluegrass and gospel music that permeates the air. Bart, however, wanted more. Classically trained, Walker considered an offer to join a German opera company. However, his curiosity kept him searching for new music.

One day Bart wandered into a blues jam and realized he found his calling. Bart paid his dues playing in Mike Farris’ (Screamin’ Cheetah Wheelies) and Reese Wynan’s (Stevie Ray Vaughan) bands before landing his own deal with Ruf Records. His 2013 release, Waiting On Daylight, garnered both national and international acclaim. This attention gave Bart the cache to see a lot of the world via Ruf Records President’s, Blues Caravan Tour, which spotlights new talent to sizable audiences. Now a seasoned player, Walker was ready and able to join the Brotherhood. “Joining RSB was the best idea anyone had for me,” said the affable Walker.

Cyril Neville has long been considered New Orleans royalty for his stints in the Grammy Award winning Neville Brothers, Galactic and The Meters. The Meters opened for the Rolling Stones and have been on the voting ballot twice for nomination into the Rock and Roll Hall of Fame Museum. Neville’s career has spawned 45 some odd years and has included performances with music icons such as Bono, Joan Baez, Dr. John and Tab Benoit.

In 1989, Cyril penned, “Sister Rosa,” about the Civil Rights icon, Rosa Parks. Last year, USA Today honored Neville by choosing the song as one of the  most inspirational song about Martin Luther King’s, “I Have A Dream,” speech on the 50th anniversary of the historical oration given during the march on Washington (Parks was in attendance). “Sister Rosa” may not have had a change on the movement at the time, but Neville’s composition reminded a country of the thousands of souls that risked their lives to bring an end to a shameful tradition in the US.

The current line-up will hit the stage with Cyril Neville (of course) on vocals and percussion, Devon Allman and Bart Walker on vocals/guitars, and Yonrico Scott (drums) and Charlie Wooton playing bass. Many consider Scott and Wooton to be the best rhythm section working, and their skills have provided the foundation for RSB to up the funk. The band is still supporting their latest release, “heartsoulblood” with dates throughout the winter and early spring months.

When the Brotherhood’s original guitarists, Mike Zito and Devon Allman decided to concentrate on their solo careers, the parting was amicable and most likely both Zito and Allman will join RSB on stage occasionally. This is because RSB is truly a brotherhood of like-minded musicians that love to work together. Some of the players may rotate (Cyril, however will always steer the ship) but the spirit is the same: write great songs and see where they take you. The chemistry, craftsmanship and artistry of the musicians will always ensure great music.

Devon’s last performance with RSB will be at the Wanee Festival in Live Oak, Florida. The show will take place in mid-April, so we ask you to still use the following photo for tour press coverage.

Click here for a photo taken by Jerry Moran:

For a photo of the lineup after Devon’s departure in April click here:  http://missjillpr.com/wp-content/uploads/2014/12/brick-wall-new-rsb.jpg  please give Misty Leigh McElroy photo credit.

For information on the band’s tour dates and news, go to www.royalsouthernbrotherhood.com

RSB is managed by Rueben Williams of Thunderbird Management in New Orleans and booking is by The Kurland Agency based out of Boston.

For more information on the forthcoming release and media, contact Jill Kettles at