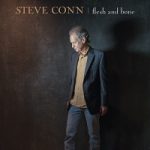 Steve Conn Bares His Soul With Flesh and Bone:

Songs Filled with Romance, Laughter and No Regrets

“Conn will kidnap you to a midnight mass on the Mississippi Delta.” – Rolling Stone (Germany)

If God has a sense of humor, then music is his way of delivering it, and one of his messengers is Steve Conn. A longtime collaborator with Sonny Landreth and many others, he’s not your usual musician – he’s your favorite one. One that speaks up and says what’s on his mind and in his heart and then puts it to a melody on the ivory keys. Steve’s latest offering, Flesh and Bone, his fifth album, will be out on February 15, 2019, on Not Really Records, and is yet another stellar career milestone by this esteemed musician.

As the album opens up, a familiar New Orleans second line shuffle frames “Famous,” a humorously dark lament about the sometimes cavernous gap between fame and reality. It then wobbles down Frenchmen street into the Miles Davis-inspired title cut, which asks more questions than it answers. There’s the killer groove of “Let Me Cry,” the bittersweet and beautiful “Forever Seventeen” and what Conn calls perhaps his most literary and obscure song, “Without A Trace,” surely one of the most powerful tracks on the album.

Conn’s fluid piano style and infectious voice go hand in hand with each song through his use of warm-sounding vintage keyboards, from Hammond B3 to Fender Rhodes to his beloved Wurlitzer electric pianos. He reveals his characters as if we know and love them, even though we may not have met them just yet. Dirty Linen said it perfectly, “…tunes that infuse intriguing stories and characters with a depth of melody and musicianship that makes clear why Conn is in such demand.”

Steve has toured Europe with Albert King, played on “The Tonight Show” with Shelby Lynne, played accordion with Levon Helm at the iconic Ryman Theatre and played on ten Grammy-nominated albums, including Landreth’s most recent, Recorded Live in Lafayette, on which he sings his song “The One and Only Truth.”

Growing up in Pineville, Louisiana in the ‘60s, Steve developed a keen ear for storytelling through music. His father was a well-known jazz violinist and bandleader, and their house was often full of his mother’s large, fun-loving family. He graduated from Louisiana State University in Baton Rouge with a degree in literature, played small clubs throughout Louisiana for a few years, and then moved to Colorado where he firmly established his musical pedigree with his popular band Gris Gris. He moved to Los Angeles in 1986 and thrived in that city’s blues and pop scene, and then back to Colorado, where he was musical director at eTown, a live radio show that continues to be broadcast on NPR. He then moved to a small town near Nashville, where he still resides.

Sometimes the songwriter likes to keep his creative cards close to his chest with his creations. When asked why he writes, Conn says:

“I was born depressed. My entire life has been in response to that fact. Through a prodigious amount of soul-searching and reading and spiritual work I have become a mostly happy person, but I have to work at it every day. A lot of the way I have learned to deal with the demons is by writing songs – but it’s not an escape, it’s part of the process.

“I write songs because I’m trying to figure out why I’m here and if God is that bluebird and how to make the world a better place. I write most mornings, and a lot of it is just talking myself out of being crazy, but out of those musings come most of my songs.

“Most of my songs are based in reality and fleshed out with lies, though I often find life to be so weird that I don’t have to stretch the truth much. At this stage of the game, I find myself wondering what happened to my life, where I’m heading, and how I can make this minute count.”

Steve Conn is a musical teller of tales. He can make you laugh; he can make you cry, he can wake you up with the truth or a humorous lie. He does all this and so much more, with a deep groove and a wink, on Flesh and Bone.

“Steve Conn may be the best singer you’ve never heard.” – No Depression

Download photo by right-clicking the image and give credit to Jack Spencer:

Uncategorized
Congrats To Doug Deming!
Check out the calendar for On The Bayou Productions!