Takes a moutain to change the world 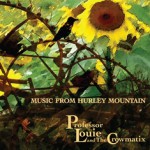 Climb The Musical Mountain With Professor Louie & The Crowmatix

Music From Hurley Mountain Out On January 15th

A Barn Burning Collection of Americana

ATLANTA, GA – Woodstock Records recording group Professor Louie & The Crowmatix present their 12th release, Music From Hurley Mountain, set to release on January 15, 2016. Recorded and produced in their small town of Hurley near Woodstock, NY, 100 miles north of the Big Apple, this grouping of all-stars bring the right amount of Americana to the band’s sound.

The Grammy-nominated Woodstock, NY ensemble, plays 150 shows every year in the U.S. and worldwide. Led by recording engineer and producer, Aaron “Professor Louie” Hurwitz on vocals, keyboards, and accordion, their repertoire is steeped in rock ‘n’ roll, blues, Gospel, to the early sounds the American roots music genre. The Crowmatix bring fans inside the musical heritage that has shaped their sound and made them one of the Hudson Valley’s most beloved bands.

The music was inspired by the beautiful farmlands next to their recording studio in the Catskill Mountains. It’s a spirited collection of 11 originals and three select cover tunes (including Jimmy Reed’s “You Got Me Dizzy”) that create a musical short story that brings listeners along on a day spent on Hurley Mountain. Professor Louie’s accordion opens up the album with a tranquil sunrise “Golden Morning” that flows throughout til the end of the day with the aptly titled “Goodnight Hurley Moon.”

Music From Hurley Mountain is divided up into scenes as you may, starting with daybreak, a small history lesson about the rural town as it evolved and some historical events that occurred in Hurley. The songs reflect different stories and relationships of the various people who settled throughout the decades. Even the sound of the tractor can be imagined as a farmer goes to the barn for a dance. As time goes on, the Rock’n’Roll Barn, LRS Recording Studio, is built in the middle of the farm on Hurley Mountain where engineers and producers continue to record with legendary & local musicians.And finally as sun sets and the moon rises, the barn still stands, and the family sits down for supper. These various tales and stories are woven into melodies that are traditional sounding like Celtic and Gospel to the recent of early sounds of rock ‘n’ roll. Whether you have two left feet or can’t carry a tune in a bucket, you can still be moved by it.

Professor Louie & The Crowmatix began as the studio backing band for Hurwitz’s musical productions with the Rock ‘n’ Roll Hall of Fame Inductees, The Band, another band based out the Woodstock area. Louie produced their albums from 1993 until 2000 when the members disbanded. “Working with Rick, Garth and Levon for 15 years was a great honor – and a lot of fun – and we’re proud of the music we created together,” says Louie. “Their love of crafting musical stories based on American history had a strong influence on us, and I like to think we’re continuing that tradition in The Crowmatix recordings.”

Each member of the Crowmatix worked in a wide variety of musical genres and different stages ranging from Bob Dylan to Joe Jackson to Van Morrison. Their level of professionalism and experience gives Louie a jumpstart with a band that still carries its small town etiquette wherever they go.

For more information and to purchase their CD please the website: www.woodstockrecords.com

To listen to a song from the CD: https://soundcloud.com/professor-louie/hurley-mountain-road

Uncategorized
Funkaliciously Yours, Cyril Neville
Andy Frasco is one happy you know what…