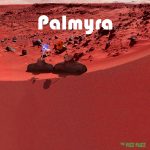 If there is an overriding theme, the songs on Palmyra it’s about emotional release and forgiveness. Throughout the songwriting process of the album, the duo of the FIZZ FUZZ (touring with a full band this summer) found continual glimmers of hope, acceptance of love, and loss. They discovered a way to understand the endings and renewals that filled that slice of their lives just a short few years ago.

Coming together for the first time in the high desert of southern California during the fall of 2017, the FIZZ FUZZ is a blues-rock band formed by Dandy and Dawn Brown. Their debut album comes out March 6 on U.S. independent label, Slush Fund out of Atlanta, Georgia, and physically in Europe on Taxi Driver Records.

Dandy Brown is a producer, singer, songwriter, and multi-instrumentalist best known for his work with the bands Hermano, Orquesta del Desierto, John Garcia, Alice Tambourine Lover, Yawning Sons, and his solo releases. These bands were right in the middle of classic stoner bands of desert rock, like Kyuss and Queens of The Stone Age. Dawn Brown is a multi-media artist, guitarist, and vocalist widely recognized as a member of the new generation of groundbreaking visual artists in the northern California Bay area. Her vocals blend well with Dandy’s and add a spiritual lift to the album. Together, they meld the thunderous rock bottom with pop melodies to create strong songs with messages that will inspire their fans.

After relocating to northern California in the winter of 2017, the Browns immediately began to write a new collection of songs that they debuted during their first European tour in the spring of the following year. “We started writing the songs for Palmyra when we moved from the desert to Santa Rosa, dry to wet. ‘Dear Old’ came together just before a winter tour in Italy. ‘Herby’ was written in the spring, shortly after we returned home. During that summer and into the fall, we wrote ‘Shame,’ ‘Loose Lips,’ ‘Collapse,’ ‘Conditional Love,’ and ‘Sunkissed,’” explains Dandy Brown.

The tracking of the album occurred in half a dozen locations: from Verzuolo to Morongo Valley, from Cleveland to Santa Rosa, from Avada to Bologna. “We are infinitely grateful to all of the friends who stepped into our album and delivered such inspiring and emotional performances,” states Dandy.

The songs, other than “Dark Horse II,” were the result of grinding their teeth through some “tremendously awful shit,” but at the same time finding space and unity that strengthen their love and friendship. While “Dark Horse II” was written close to fifteen years ago, for Hermano’s Into the Exam Room album, it perfectly fits the motivation and inspiration behind the collection. These songs reflect a million moments that occurred when the duo was writing them.

“Of course, they’re just songs. They won’t purify water or turn straw to gold. They are, though, the symbols of all those moments and mileposts along the road,” – Dandy Brown.

Recording and performing throughout 2018 and 2019, the FIZZ FUZZ has a new album set for release on Slush Fund (Worldwide) and Taxi Driver (physical in Europe) on March 6, 2020.

For more on the band: the FIZZ FUZZ

with Scott Reeder on bass (Kyuss, Fireball Ministry) and Steve Earle on drums