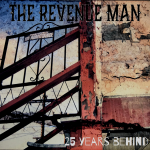 Glenn Brown aka The Revenue Man

Looks Ahead In The Rear-View Mirror

With 25 Years Behind Album Out On March 6

Lyric Video for “Tennessee Sunset” has over 12k views on YouTube!

The Revenue Man’s debut release may be called 25 Years Behind, but the man himself, aka Glenn Brown—packs years of wisdom into these songs. Spanning from an unwelcome family legacy, romantic nostalgia, and even an Elvis Costello classic, these new songs bring in the best of the past. The album will be released on March 6, 2020, along with the video for “Tennessee Sunset” that aims to be the arrow to fans’ hearts.

The first thing you notice on 25 Years Behind, is Brown’s voice, solid and reassuring with a tinge of heartbreak. Perhaps, therefore at times, he claims to sound like a beardless Cody Jinks, a country Jason Mraz, and his use of the timeless phrasing of the legendary John Anderson. The next thing you will hear is, as a writer, is that Glenn knows that songwriting is all about perspective. He gives it to you in black and white with no regret or shame from all angles. But mainly from the heart.

The album was recorded at Back Holler studios in Tennessee and mixed in Los Angeles at Ultra Dose Music by Tim David Kelly (Kicking Harold), and with his rock ears, he was able to bring an edge to the songs or a patina sheen to them. “Tim has started writing some country (more pop/rock country) and he knew that I was doing the album. We had worked together in the past and I was looking for a “non-Nashville” perspective. He’s super talented and I was happy he wanted to do it,” explained Glenn.

“The title track, “25 Years Behind,” is about overcoming a father that died in prison, being named the same, and living to break the cycle, and succeed despite the circumstances,” Brown says. His meditative chords flow beneath an assertion that “it’s time for his son to shine.”

“Reasons Why” details leaving a self-destructive lover and knowing there will be the temptation to return. Brown beautifully acknowledged the spark they shared: “Although it burned, it shed no light.” Elsewhere, he trades the metaphor for a no-nonsense plan to “wait till she’s sober and tell her it’s over.”

The centerpiece song of this album is the beautiful “Tennessee Sunset” shows a more nostalgic take on romance says Brown; “This is a love song that’s more purely nostalgic, a dark cloud hanging over the singer to contrast the colors of the sunset as their love comes to a close.” The song was co-written with long time songwriting cohort Denny Rudolph (Ambers Drive). It charts a meeting of ex-lovers from the perspective of the man who destroyed a good thing and still has regrets. Brown delivers the line “Life has a way of settling my debts” in a way that makes all of us believe he is contrite. The video for the song was created by Cathal Cackael from @influencer_services in Europe and it has a growing number of views, over 7,000 to date!

“My Own Eulogy” is a fantastic glimpse into orchestrating your memorial service. In a traditional country irony, Glenn wants everyone to “laugh about all the times he’s lied, comfort all the girls who’ve cried,” and most importantly, “Have a drink, this one’s on me.”

Brown teamed up with Troy Breslow to pen “Arlo’s Stories,” which, again, brings up his missteps and the issue of an abusive father. More importantly, it uses nostalgia and a love of listening to older music to come to a kind of, if not a closure, a softer landing. “I’ve been through John Prine’s Bible. Once or twice, I’m still the same.”

A special highlight on this album is a version of “(What’s So Funny ‘Bout) Peace, Love, and Understanding?” originally performed by British rocker Elvis Costello (actually written by Nick Lowe) and a hit in 1979. Glenn gives it the country tinge and makes it almost unrecognizable, and that’s the art of covering a song. The backing vocals, along with the country shuffle it would easily find its way to Bobby Ide’s Hour on Music Row faster than Lower Broadway.

Born in the Northeast, living most of his life in California, schooled and repatriated to Tennessee, Glenn’s first instrument was the cello, which gave him some fluency with a variety of instruments early on. While he got his start making post-punk and pop music, he always felt drawn to the authenticity of Americana.

As a bonus to this album, there will be a limited release on vinyl containing three unplugged versions of the following songs; “25 Years Behind,” “My Own Eulogy,” and “Tennessee Sunset” recorded live direct to analog tape at the legendary Sun Studio in Memphis, which came out very intimate as the vibes of the studio seeped into Glenn’s voice.

Glenn Brown has performed all around the U.S. at venues including LA’s The Troubadour, Washington, D.C,’s The Roxy, and Nashville’s 3rd and Lindsey. He’s engaging enough to deliver compelling solo shows, but he’s also skilled enough to perform as part of a four-piece or five-piece band.

25 Years Behind is a new album from an old hand in music. The Revenue Man has stories that people want to hear, and he tells them poignantly.