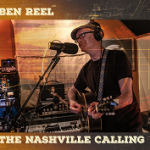 Produced by Will Kimbrough and Tommy Womack

Songs are packed with punch, grit, and soul – Album Out March 27

“Ben has a lot of soul, a powerful voice, and a batch of dead on songs.” – Will Kimbrough

“Blessed with a vision and his tremendous voice, he gets inside his words and music and makes magic.” – Tommy Womack

Reel sings about how humans are resilient and brave during life’s peaks and valleys in the anthemic, “Tough People” – as the chorus rings out;

“I was cornered, my back was up against the wall
I’d run out of choices to choose
I came out fighting with all guns blazing
I had nothing left to lose”

The Nashville Calling, the new album from the Irish roots rocker Ben Reel, was done and dusted in just three days with all live takes. Ben picked two of Nashville’s most luminous voices, to produce it; Will Kimbrough and Tommy Womack down at Skinny Elephant Studios in Nashville, TN. The two gathered an all-star cast of players to back him: Garry W Tallent of Bruce Springsteen & The E Street Band on bass and Evan Hutchings on drums, Will and Tommy on various guitars and Reel’s wife, Julieanne on backing vocals. This excellent album will be available on March 27, 2020.

“reminiscent of Dylan and the Band” – Folking.com

The Nashville Calling is Ben’s ninth album, throughout a successful 20-plus year career that has carried him through the years, between Europe, Canada, and the U.S. Since his debut album This Is the Movie back in 1999, Ben has reinvented himself from record to record, influenced by different styles of music over the years. As one critic said, “He’s not afraid to throw in some in folk, soul, reggae vibes, which in turn call to mind John Hiatt at his best.” Ben’s last effort, Land Of Escape, had him exploring social and cultural issues that Americana-UK called “intelligent” and “slow-burning.”

“His energy and desire to communicate and to sing is infectious; the Armagh man’s band rises to the challenge.” – Irish Times

Staying true to the essence of a true-blue troubadour, Reel takes his role in the world seriously and addresses the human spirit to expose their strengths during weakness. He addresses the world and how it needs to stop looking at the past, in “New Jerusalem” about how the world keeps changing, and we need to change with it. In the song, “Imagination,” he begs the world to think outside the box with problem-solving. Ben gets romantic as well, with songs like “Fine Wine” and “Like A Breeze,” for these vignettes are like conversations that might take place in the kitchen or on the back porch under the stars.

The video for “Up There In The Sky” was filmed at an Irish boxing club using black and white film.  The song is all about grabbing life by the horns, taking chances and above all, having the self-confidence to do so:  https://youtu.be/pNw2oZIb_yM

About Ben Reel: Against the backdrop of the troubles in Northern Ireland, music became Ben’s way out:

“Hard times come; hard times stay
Some folks know no other way
Struggling just to get through this hard day
Struggling most their lives away” – “Broken”

Ben Reel is a native of Silverbridge, South Armagh, in Ireland, and soon after high school at the age of 17, he started his musical career in 1989 performing and songwriting with the local band, Trim The Velvet before going solo in the late nineties. He first picked up the guitar when he was fifteen years old, inspired by the realness of the likes of Bruce Springsteen, Van Morrison, and Neil Young, whose music struck a chord that resonated deep into Reel’s psyche. Reel proudly wears these comparisons on his chest when it comes to his approach to performing and writing. One of the most exhilarating moments of being a songwriter is to write with your fellow artists, and Ben has a legendary list for himself. Amongst them are; Hal Ketchum, Ian Dury and the Blockheads, Tony McLoughlin, Irene Kelly, and the late great David Olney.

Over the last ten years, Ben has enjoyed successful tours in Ireland, UK, Europe, and the U.S. receiving rave reviews and attracting a growing loyal fan base. He will occasionally perform as solo or duo with his wife Julieanne or with his Dutch band `The Haarlem Boys,’ but mainly he plays with his fantastic Irish band Ben Reel Band, which is a sonic spectacle for sure!

Ben has long been touted as the Irish Bruce Springsteen, which is a badge of honor for the songwriter, but he also has other sounds in him, like Memphis Soul, some Chuck Berry syncopation, a little Texas swing, the fire and brimstone of a southern gospel preacher, and the jangling guitar sounds of The Byrds. He’s precisely what rock n roll is meant to be, full of swagger, attitude, and heart.