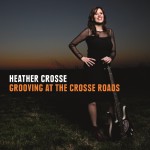 Heather Crosse Steps Out On Her Own

“Grooving At The Crosse Roads” Debut

A lot of today’s emerging blues artists serve up the music with a healthy side order of rock. Heather Crosse is different. As a singer, songwriter and bass player, she still believes in the power of old-school blues and R&B.

“Blues and soul just speak to me the loudest,” says Crosse, who’s spent the past two decades paying her dues at festivals, clubs and honky tonks across the American South. Originally from Louisiana, she’s now an in-demand player in her chosen hometown of Clarksdale, Mississippi where she and her band have backed up blues heavyweights including Bob Margolin, Guitar Shorty, Jody Williams and James “Super Chikan” Johnson. For years, Crosse has regularly appeared at the world-famous Ground Zero Blues Club. Early in 2015, she toured Europe and the UK as a member of the Blues Caravan 2015 “Girls With Guitars” tour and was also part of the Jim Gaines-produced album of the same name. But the rock-oriented slant of that project wasn’t her thing.

Her solo debut Grooving At The Crosse Roads shows what she is really all about. It’s all blues – with a soul twist. “I grew up singing Motown and a couple of my blues mentors did a lot of 70s soul. So that tends to come out in the songs that I’m writing,” explains Crosse, who co-wrote five of the album’s eleven tracks while also paying tribute to heroes such as Etta James and Big Mama Thornton. It’s the kind of mix she relies on to get Mississippi crowds dancing on a Saturday night.

Though it’s her name on the cover, Crosse chose to record Grooving At The Crosse Roads with the same band she’s been fronting for the past eight years: Heavy Suga’ & the SweeTones. The current line-up includes Crosse’s songwriting partner and significant other drummer Lee Williams (B.B. King, Big Jack Johnson), keyboard wizard Mark Yacovone (Kenny Brown, Maria Muldaur) and guitarist Dan Smith (Anson Funderburgh, Smokin’ Joe Kubek). The songs convey the comfortable feeling you’d expect from four friends making music together. “Our band is a unique thing. We’re very tight and close, like a family band,” says Crosse about choosing her own musicians over session players.

With the help of Grammy-winning producer Jim Gaines – whose worked with everyone from Carlos Santana to Stevie Ray Vaughan during his illustrious career – Crosse and her comrades turn in a collection of first-rate performances. At the soul end of the spectrum there’s the laid-back musician’s anthem, “Hurryin’ Up To Relax” and a cover of the 1975 top ten hit “Rockin’ Chair,” originally recorded by Gwen McCrae. Crosse felt a little intimidated doing this well-known tune but likes what Gaines and her “guys” were able to conjure up. “Besides, I think it’s kind of interesting to have a white girl bass player resurrect a 70s soul classic,” she grins.

At the blues end she offers “Walkin’ In Their Shoes” as a loving remembrance of the elders who schooled her in the ways of the blues, as well as “Clarksdale Shuffle,” dedicated to the city that has become her own ground zero. “It’s been a big part of my life,” she says of her adopted home in the heart of the Mississippi Delta. “I was there as an 18-year-old, just out of high school, and that’s when I fell in love with the blues. I went back every year for the Sunflower Blues Festival, no matter where I lived, and that’s how I ended up moving there.”

Crosse is thrilled about the sounds veteran producer Gaines coaxed out of her band. “Jim got so many different guitar textures and layers from just one guy. And it was the same with my keyboard player. He’s got so many layers and textures. We’ve got a B3 organ, that old Pinetop piano sound, a cool Ray Charles electric piano sound…”, laments Crosse.

Gaines also helped her raise her game vocally. “He brought singing out of me that I didn’t know was in me,” Crosse reflects, her feral growling on Etta James’ classic “Damn Your Eyes” a good example. It’s one of the grittier moments on an album that unlike so many others that come down the pike – doesn’t take a sledgehammer to the blues, but instead uses a set of fine-tipped brushes to create a down-to-earth landscape of blues and soul. Crosse is confident that with Grooving At The Crosse Roads, she has created a recording representative of her own unique and personal blues journey. “It’s everything I thought it would be and much, much more.”