Zito brings his Wheel back around… 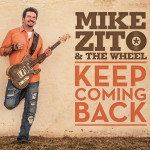 Produced by Trina Shoemaker and Zito – CD out Nov 6

“He’s a rough-edge sculptor who has the classic masters in mind and then makes a unique modern artist statement.” – Boston Blues Society

Ruf Records award winning artist singer/songwriter/guitarist Mike Zito paints a beautiful imperfect picture with Keep Coming Back. Colorful images of his past, present and future are all set to some of the most powerful melodies of his career. Recorded at Dockside Studios in Louisiana, the album was produced by Grammy Award winning Trina Shoemaker and Zito himself, is set for November 6th release. Taking cues from his musical collection, live shows and his solid backing band, The Wheel, the guitarist finds himself in a fine place.

“Having fun and playing music you love and believe in; it’s all about the song.” – Mike Zito

This Texas rocker bleeds the words in his songs – “I’m Drunk” (co-written with Anders Osborne) describes his life-long addiction struggles and how many victims he has left behind.  Mike always returns to his founding values of honest, original songs, drawn from the emotional depths, twisting the great American genres into bold new shapes. The Credence Clearwater Revival cover, “Bootleg”, closes out the album with a bang, is most fitting for Zito’s voice. That voice moved a writer enough to call it, “velvet”.

The title cut is a memo to himself of how life runs in circles.  It’s a typical slice of brutal honesty from a man who has always told it straight. Ask Mike for his backstory and he’ll give you warts and all.

“Keep Coming Back; Give your burden to the Blues

Keep Coming Back, Whatta ya got to lose”

Keep Coming Back is home to seven new Zito-penned originals, three co-writes with Anders Osbourne and two covers, Bob Seger’s “Get Out Of Denver” and CCR’s “Bootleg”.  “I love to tell stories,” says the bandleader, “and these songs are stories from my heart, my crazy mind and my life. With the help of Anders, I think I’ve got the best collections of songs I’ve written yet.”

“…his fiery playing elevates each and every song, as do the swallow-your-emotions vocals.” –Vintage Guitar

Working with producer Trina Shoemaker gave Zito a fresh new start. “Trina and I were simpatico in our ideas of what this album would sound and feel like,” recalls Mike, “and she nailed it. This album is raw when it needs to be, subtle, sincere and grooving all the way through. My band is in top form. The musicians gave their all to the songs and brought out the best in me.” This band took the energy from the road to the studio in a hot flash. Top notch players include Jimmy Carpenter (saxophone/vocals), Scot Sutherland (bass), Rob Lee (drums) and Lewis Stephens (keys).

This seasoned musician has a lot to reflect on, solo albums, a Blues Music Award winner, a founding member of Royal Southern Brotherhood, as the wheels keep rolling for him.  There’s a spectrum of genres that can only be called Americana – part-blues – half a cup country and another cup of rock – makes Mike Zito who he is.

Mike and his band, The Wheel will embark on a supporting Keep Coming Back – check his website for updates – www.mikezito.com

To listen to a private link of the CD click here: https://soundcloud.com/jill-kettles/sets/mike-zito-keep-coming-back/s-as9Tf

To download a photo – please use Roman Sobus for photo credit:  http://wp.me/a4AfYg-5I