Holding On – A Collection Of Stories, Tales and Lies

“Madison, WI’s new folk and Americana music scene is bursting at the seams. . .But no one’s been behind the plow longer, works harder, or writes a better lament than Josh Harty.” – No Depression 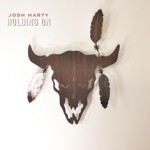 rty Continues To Bring His Best

Holding On – A Collection Of Stories, Tales and Lies

Evoking ghosts from the past, future and present Josh Harty is a master storyteller who takes matters into his own hands; by living it. His smooth baritone and rolling melodies of his fifth album, Holding On, are a match made in heaven. Josh’s unique blend of American music has become a must-hear for those who keep the tradition of country, blues and folk close to their hearts. Produced by Blake Thomas and Mark Whitcomb at DNA Music Labs in Madison, WI, Holding On will be released on April 8th via his independent label.

A son of a small town police chief and preacher, he often muses that growing up he figured he’d end up going to jail or going to hell. Growing up he sang gospel and country with his father at just about every Lutheran Church, Eagles Club and Senior Center in the Midwest. By age twelve, Harty had made two records (cassettes) with his dad; achieving sales of 10,000 copies.

After playing in several cover bands in Fargo during his teens, Josh starting his songwriting career when a local booking agent asked him if he could perform 45 minutes’ worth of original material for an opening gig. He said of course he could and set to work writing the songs that would become the material for his first album Three Day Notice. After just a week of writing and rehearsing these new songs, Josh received a standing ovation and encore request from the audience while opening for BB King.

In 2011  Harty released Nowhere, recorded at Base Camp Studios in Bozeman, MT by the acclaimed performer, producer and engineer Chris Cunningham (Storyhill). 2014 saw the release of two duo albums Harty recorded between 2012 and 2013; 12 August with fellow Americana artist John Statz and The Attic Session with longtime collaborator Blake Thomas.

“Josh Harty has a voice for troubled times and he works his way into the lives of his lost love characters with perfection. “ – The Alternate Root

Over the last five years Josh has toured tirelessly in 41 States and countries across Europe and the United Kingdom. More than just moving along, he’s spending plenty of time in the communities along the way, from Brooklyn to Harlem, from London to Portland. Josh is always looking for that balance between the rolling road and the people who inspire him, trading stories around kitchen tables and theater stages. His live shows prove that good storytelling combined with journeyman musicianship is as American as music gets.

Here are some of his thoughts on Holding On:

“Holding On”: “I’d been on the road for a year.  Eight months in the States and four months in Europe. 170 and 78 shows, respectively. We came back into Atlanta with a month off and the idea was to write an entire record. After a lot of decompressing and staring at the wall, “Holding On” happened. My good friends Kelley McRae and Matt Castelein (husband/ wife and internationally relentless touring duo) sing the amazing harmonies.”

“The Kind”: “The Kind came about on an afternoon in Bushwick, Brooklyn in an apartment about 3 feet from the M train. Originally it had more of a train feel, as you might imagine. It tells a story of someone having gone a thousand miles, and done a lot of things but not necessarily the right way. And then not wanting to change.”

“Learn To Fight”: “I wrote this song after a weekend with a friend. I learned that a strong constitution is expensive.”

“Ballad For a Friend”: “I was reading an article in the Dallas Morning News. Kids #1 and #2 were pissed because kid #3 was seeing #2’s ex-girlfriend. Mind you, they are all 16 or 17 years old.  #1 & #2 get #3 out in the woods after school one day and kill him. Again, they’re 16 or 17 and it’s because of a girl. Unreal. I decided to try to wrap my head around these kids heads and imagine what they were thinking. It’s a dark place.”

“English Rain”: “I wrote this song the day we recorded it and finished it about 5 minutes before we tracked it. Once. First take.  It’s the end cap of Holding On. Late the previous night I sat on the front porch and listened to the trains in the distance and thought about the last four years on the road. Maybe felt a little homesick.“

Holding On is about traveling, pulling up stakes and leaving, selling the cat and giving away the house and reading the newspaper. Josh gave up permanence for another search; his place in time. Sometimes the only way is to hear the road call, is to hit it.

Uncategorized
Never take no for an answer…
A little salt here, a dash of George Lowell and some Pink House