Never take no for an answer… 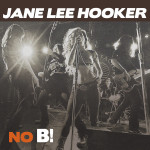 JANE LEE HOOKER TAKES NO B!

These ladies mash up the grit and attitude of NYC

And hold nothing back

On April 15th Ruf Records group, Jane Lee Hooker will release No B! a record filled with blues and rock covers as well as originals that stick like glue with grinding guitars backed by a pounding drum beat. Produced and recorded by Matt Chiaravalle at Mission Sound, Brooklyn, NY and Mercy Sound, NYC, it’s bound to shove new life into their fans.

“These women do more than just pay tribute… they mix in elements of punk and classic rock to give them such a distinct, hard-edged sound.”   – Guitar Girl Magazine

Tearing out of their native New York these five rockers fuse the sticky thrills of golden-era punk and blues with a healthy slug of modern attitude. “Not a lot of bands can capture the excitement, sweat, and charisma of the ’70s bands we grew up listening to,” they say. “But we can, and we do.”

Who are these chicks?

Between the five members, they have decades of experience playing, recording, and touring both nationally and internationally. Individually, the members have performed for thousands of fans while sharing bills with the likes of Motörhead, MC5, Lynyrd Skynyrd, and Deep Purple.

Guitarists Hightop and T-Bone honed their love of blazing dual leads in Helldorado in the ’90s. From there, Hightop joined Nashville Pussy, T-Bone joined Bad Wizard, and both toured endlessly around the world. But when their time with those bands ended, they realized they missed the rush of trading guitar solos with one another, leaving audiences howling with joy. They quickly recruited Hail Mary, who played bass with Hightop in the punk band the Wives. Cool Whip sat behind the drum kit and got the nod before she even finished slamming out the first song of her audition.

And no other singer in NYC can bring a crowd to its knees harder or faster than Dana “Danger” Athens.

When it came to tracking No B! last year in Brooklyn, the five-piece were equally clear in their mission statement. “We told our producer, Matt Chiaravalle, that we wanted it to sound exactly like the album “Hard Again” that Muddy Waters and Johnny Winter did in 1977,” recalls High Top (who coincidentally chose her nickname after Mud’s shout-outs to Pinetop Perkins on that record). “It’s the album that both Tina and myself played along to when we were kids, to learn how to solo. I still think it’s one of the greatest albums ever recorded and some of the finest from Muddy and Johnny.”

Ten of these tracks find the band digging back into the blues songbook, exhuming a fistful of standards including Muddy Waters’ “Champagne And Reefer,” Willie Dixon’s “Shake For Me” and Albert King’s “The Hunter.” In each case, Jane Lee Hooker claims ownership, pouring on the rocket fuel until even the dustiest standard becomes a stinging punk-blues thrill-ride, driven by jackhammer rhythms, twin lead guitars, and Dana’s scorched-earth vocals.

“…captures the nostalgic feeling of classic blues-rock, a ballsy punch in the face…This all-female ensemble of virtuosos knows when to step out of the pocket to balance the explosive driving force of Dana Danger Athens’ vocals.” – Tom Tom Magazine

“We basically play songs we like, and they end up turning into something that has our own take on it,” says the band of their respectful-yet-rebellious approach. “Like Mean Town Blues”: it’s such an amazing song, and our version pays tribute to that. We feel the spirit of Johnny Winter is with us on the ride.”

No B! is a testament to the band’s own songwriting skills that original tune “In The Valley” stands shoulder-to-shoulder with the celebrated moments on the track listing. “We’ve been having a blast taking the spirit of these amazing classics we’ve been playing and developing a style to write our own original songs,” says the band. “There are thousands of masterpieces out there that so many people don’t even know about. And at the same time, there are enough shitty songs in the world – we’re not interested in adding to them.”

In the era of cut-and-paste, computer-driven recordings,  No B!’s production was as minimalist, and the results explode out of the speakers. “We played live,” continues High Top, “and we used no effects. We all played in the same room at the same time. Most songs were done on a first take. I don’t think we played anything more than twice!”

They drive the van at 100mph with their music. You can’t call them girls; you call them chicks. They are by no means new to the game. This five-headed punk-blues juggernaut is coming for your hearts and eardrums.

Tre they bleeding yet?

Uncategorized
Band is in the van and ready to go!
Holding On – A Collection Of Stories, Tales and Lies