Earworm of the Day: Dudley Taft 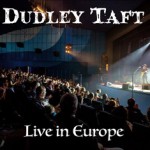 American Blues Artist Group drops the music today with Dudley Taft’s LIVE IN EUROPE available online and at shows. LIVE is filled with originals and hand-picked covers that will blow off fans’ and critics’ heads alike. Recorded at the Het Wapen in Vriezenveen, NL; the Dom Kultury in Kielce, PL and Radio Rzeszów in Rzeszów, PL Produced by Taft and his long time producer John Kessler and mixed by Ashley Shepherd at Audio Grotto, Newport KY, LIVE is a musical capsule for the ages.

The Dudley Taft Band has been building a firm fan base in Europe, touring extensively since 2011. The new album, Live in Europe was recorded in 2014 and 2015 in from three shows in The Netherlands and Poland. It gives the listener a taste of their live versions of originals and favorite songs by other artists. You can hear them stretch out on extended versions of Taft’s “Broken Down”, ZZ Top’s “I Heard It On The X”, Warren Hayne’s “If Heartaches Were Nickels” and Peter Green’s “Oh Well”, to name a few.

LIVE comes on the heels of 2015’s chart topping SKIN AND BONES that received critical acclaim with words like, “hardcore, expletive-spitting, razor sharpness’, (American Blues Scene). Recorded at his Muchmore studios in Cincinnati, OH, in a home once owned by legendary Peter Frampton.

“I like blues because it touches on dark and heavy things. I’ve always believed that it’s important to have old and new influences.“ – Dudley told Premier Guitar in 2013.

Dudley’s music career began in high school when he founded the band Space Antelope with friend Trey Anastasio (of Phish). In the 1990’s he joined Seattle band, Sweet Water, touring the states with Monster Magnet,  Flaming Lips, Candlebox, and Alice in Chains. After recording two albums for Atlantic, he left the band to join Second Coming. More touring followed with an album on Capitol Records and a taste of success thanks to the single “Vintage Eyes” which made it to #10 on the Rock Radio charts.

In his music, you’ll hear Delta roots mingling with Seattle grunge, a southern twang with a high-octane crunch. Dudley’s music is a visual film that comes to life with his dark look and respect to the music itself. He honors the players that came before him and those around him but is always looking down the road into the future

Take a listen to Taft’s cover of Bob Dylan’s “Meet Me In The Morning”: https://soundcloud.com/dudleytaft/meet-me-in-the-morning

The touring lineup includes John Kessler (Co-producer of many of Taft’s albums) on bass guitar, Carl Martin on drums and Eric Robert on Keyboards.

LIVE IN EUROPE is available at the following sites:

Uncategorized
No Small Porch For Albert… no no no way…
From the streets to the alleys to the backdoors and the sidewalks….