Cross the bridge quietly for you can hear the wind blow… 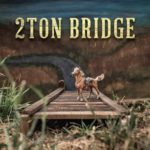 ab the wheel, cross your heart, and take the journey

“…uncompromising yet kind-eyed songs … His music is as American as the last dirt road you traveled, rippling with the sinewy groove of worked muscles.” – No Depression

The long awaited album from the Americana artist 2Ton Bridge is here. This self-titled release is filled with colorful portraits of the struggle for dignity and significance by characters confronting personal watershed moments. Produced by Marvin Etzioni (Lone Justice, Lucinda Williams) and distributed by Clay Pasternack, Inc/CPI Distribution on the artist’s label Monkee Room Music will be out on September 2nd worldwide.

Last fall, 2Ton Bridge released a digital 45 to give everyone a taste of what to expect.  “I’m A Hoot Owl” and “Pennies On The Shore” were met with warm greetings and high praise from fans and the press. Since then, like all folksingers, he’s kept his head down, working hard at this fall release. He had residencies at The Trip in Santa Monica, shows at House Of Blues and Molly Malone’ and various venues throughout Southern California. Apart of from his musical chops, he continued to act with two films, “Welcome To Happiness” and soon to be released horror film “Abattoir”.

I put food upon your table

I give it away if ya can not pay

I feed the poor and unable

I’ll get mine some other way

Take your hands off my land

Take Your Hands Off My Land

But it was after his performance at this years’ Folk Alliance in Kansas City, MO, that the anticipation of an auspicious full album release was set high.

As a modern folk singer he evokes a respect for stories of human struggle and timeless themes of love, death, and man’s relationship to the earth. He does not let go, back down or settle for less. You can see the cinematic landscape as the music stomps, flows and mingles with singer and songwriter Alexander Wright at the heart of the pulse. He sings about hands, backs, boats, and dear loved ones; gestures that paint scenes of life; anthems, waltzes and sweet melodies.

“The most reassuring voice in Americana music today.” – Folk Union

Salt water runs in the family, run a trot line down to the bottom of the bay

About what you think who I am

Recorded at Cottage Studio by Sheldon Gomberg with producer Marvin Etzioni, who brought together the most creative and individual players to deliver and support  2Ton’s unique voice; Joachim Cooder, Jerry Donahue, Eric Heywood and Tammy Rogers. Many different colors of instruments were used to set the tone – fiddle, banjo, mandolin, accordion, mandocello, electric and lap steel guitar – painting a lush musical landscape. Mixed by Ryan Freeland and mastered by Gavin Lurssen, this team has sculpted a unique sound that gives a new voice to a traditional inspiration.

There are lifetimes lived in the stories in these songs. Love, death, work, the earth, atonement, the search for meaning, social justice and above all; personal dignity.

It all comes down to two questions:

“These songs aren’t answers, just a few pictures of people’s search for the answers, a journey into a deeper way of looking, living and being on the earth. Looking at the end of a life’s journey, or at the revelation of a new life ahead, a look at the strength and timelessness of love, and the inevitability of change and personal transformation. For by asking these questions, we no longer require the answers. To recognize something as it truly is, is to change your relationship with it.” –  2Ton Bridge

One might recall Leonard Cohen or Tom Russell in 2Ton’s music but he stands alone with his feet firmly planted in the soil of determination and his unique musical integrity intact. This is something blue, something new and nothing old. The weathered smiles and measured voices of watermen, farmers, men of the earth live inside a love song, a worried ode, a hopeful anthem; like a memory that has yet to happen.

“… this is what Americana is supposed to sound like.  Wright has a GREAT voice….so deep and resonant”