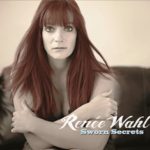 “With a touch of gallows humor and a dash of powder keg passion, Renée Wahl’s songwriting grabs me by the ears on the first listen.” – Sloane Spencer, CountryFriedRock.org

Set for a September 30 release, Sworn Secrets is filled with pain songs, love songs and reflection songs from Nashville singer-songwriter Renée Wahl that capture her life in a bottle. This is the first of a two-part EP series to be released with the second in the winter. Produced and mixed by Patterson Barrett at Joe McMahan’s Wow & Flutter Studios in East Nashville; she will release this through her label Double R Records. The Pennsylvania native is carving out her own space at the recently rediscovered intersection of East Nashville, where the sounds are grittier than a polished Music Row, just a few miles away.

Inspired by groundbreaking artists including Neko Case, Buddy and Julie Miller, Linda Ronstadt, and Ryan Adams, Wahl deftly crafts accessible songs that explore the human experience. From escaping emotional torment to finding a short-term solution to a temporary loneliness problem, few topics are off limits when it comes to Wahl’s powerful and personal approach to songwriting.

Wahl’s thoughts on some of the tunes:

Wild Living – “The song came about while reminiscing about when I lived in Philadelphia and looking back at all the unbelievably crazy things I did. I was feeling melancholy about being so uninhibited then and wanting to be that way again, and yet, thankful not to that be destructive and irresponsible anymore. It’s a fine line…”

See You on the Way Down – “When I came up with the title the overall idea was about knowing you shouldn’t do something, but you do it anyway.  So it can apply to anything and, at first, it wasn’t really about a relationship, but the song wanted to go that way!”

Better the Devil – “I clearly remember the time I came up with the first few lines of this song.  I was making significant life changes with so many unknowns when suddenly, I dropped a light bulb, and it shattered on the floor.  I started to feel a sense of panic over what I was doing and the idea just spilled out.”

Her writing and singing voice recall Jessi Alexander, Lucy Kaplansky and Jude Johnstone, whose careers have been long and diverse. As her approach is tried and true, she tries to echo an old Cowboy Jack Clement’s tip – “reveal some of yourself with most of your songs.”

“Songwriting can be very personal, and in some ways, it can be secretive,” Wahl says. “When writing, I dig deep, and that sometimes brings up subjects that I might not normally talk about in an open environment.”

Inside the studio can be a daunting experience, but with Patterson Barrett, a long-time veteran of the Americana genre, it was easy for her to relax. “Renée’s songwriting talent is obvious, but for me as a producer, she’s a joy to work with. She’s such a good singer; she makes it sound so natural and effortless that you might not even notice when you first listen to her,” gushes the native Texan. “During recording, she’s very receptive to suggestions regarding her performance. I’m proud of the record.”

A native of Harrisburg PA, Renée was raised in a large working class family. She started to play piano at 6, voice at 7 and guitar at 8 and violin at 10 and finally saxophone at 11. While show business may be in her blood — her grandmother was a Vaudeville singer and tap/acrobat — Renée owes much of her grit and determination to her grandfather, who served as a tail gunner on a B29 “Superfortress” in World War II. She caught the Air Force bug from him when she was at Wagner College, then left for boot camp after her freshman year.  After graduating from East Stroudsburg University with a physics degree, Renee joined the Air Force. She earned her Masters Degree in Aeronautics and then was assigned to the NSA as a staff scientist.

As Renée pushes forward with Sworn Secrets, she embraces the future of touring, more songs written and more albums. So as for now, she just shows you the first five Sworn Secrets… time will tell.