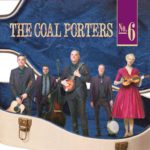 The Coal Porters: Singing About The Ramones, A Blind Bartender, And Chopping Garlic?

Sid Griffin And His Band Serve Fans No. 6 On September 9th

“…feckless and flawless delivery…” No Depression

Who else gushes over The Ramones, tells tall tales of love and murder, and shares their love of old westerns?

That is what Sid Griffin and his band The Coal Porters have done with their latest release, No. 6 set for a September 9 on Prima Records distributed by Burnside Distribution. Produced by John Wood (Fairport Convention, Nick Drake, Squeeze and Beth Orton) at Strongroom Studios in London, England, this slice of Americana with a cup of British tea continues to solidify them as a powerful studio and touring ensemble. They have traveled all over the world performing at hallowed concert halls, tiny clubs and festivals to deliver their brand of bluegrass which has been called, “Alt-grass” or “alt-bluegrass.”

The Coal Porters were formed in L.A. as an electric band at first but a mad dash to move across the pond was in need to renew their spark. There, they threw the amps into the Thames River and opted for tailored suits to create their musical fusion. The current line-up is Sid Griffin at the helm with long-term sidekick Neil Robert Herd from Scotland, fiddle virtuoso Kerenza Peacock, bassist Andrew Stafford and ace banjo guru Paul Fitzgerald.

Griffin sums it up by saying “The Coal Porters are five musicians who play four chord songs from three countries for two good reasons; for health and happiness.” So in a way, this quintet, of stringed instruments, dance to the beat of their own drummer.

Sid Griffin is The Coal Porters’ most visible member. Griffin, a noted author who has written books on Gram Parsons and Bob Dylan but most known as a founding member of The Long Ryders, a band that was a part of the Paisley Underground movement in Los Angeles. This group was a melting pot of sounds; rock, punk and country had a legion of fans that included R.E.M. to The Jayhawks to The Black Crowes. Before disbanding in 1987, the band recorded four albums and had a hit called “Looking For Lewis And Clark”. The band has been credited for anticipating the Americana genre that kicked into high gear in the early 1990s.

The album opens up to the tune of “The Day The Last Ramone Died”, a eulogy of sorts written by Griffin, remembering his first show of the legendary band from Queens, NY. Sid and his friends would never be the same. “Gabba, gabba hey” to “hi ho let’s go…”

No. 6’s tunes are based on life’s experiences with a dose of smart wit.  In “Salad Days”, Sid writes about being young, unstoppable and not listening to anyone; “Didn’t want to hear ‘I told you so.’” Maybe that was something that rubbed off from that Ramones show?

Both Sid and Neil Robert Herd bounce back and forth with writing songs and vocals throughout the album which allows them to evolve like they have. Tunes like “Save Me From The Storm” and “The Blind Bartender” are filled with words of faith and philosophy by an old man of the sea and a blind bartender who “sees all” with his heart.

Violin player Kerenza Peacock’s sweet high soprano voice sounds a like a bird on her own penned song, “Play A Tune” recalling her mother’s words about how music heals us by singing, “The world has enough discord, bring some harmony.” Kerenza is currently on tour with Adele playing violin around the world.

The song, “Unhappy Anywhere”, is a story about two lovers, having to separate to come back to each other. Of course, a bluegrass album has to have a murder song to be complete, “Train 10-0-5” and “The Old Style Prison Break” both provide tales of a gold rush, men in hats, brassy girls, and Wyatt Earp.

The Coal Porters are closer to the blues than any other musical group out there today. They mix in pain and laughter with life’s lessons to teach all of us to have high hopes and keep our eye on the ball.

The Coal Porters members are:

For more info on the band: check out their website: The Coal Porters

Uncategorized
Time to wind up! Fall Releases are coming…
to quote Elvis Costello… “if they say that it`s so – Don`t you think that I know by now”