Band is in the van and ready to go! 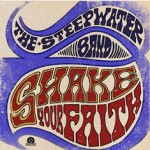 Out April 1 On Diamond Day Records

Diamond Day Records announces the release of The Steepwater Band’s 6th full-length studio album Shake Your Faith for April 1st. The LP features 11 brand new tracks and will be available via Compact Disc, Digital Download, and Double 180 Gram Vinyl. They recorded it last winter at Crushtone Studios, in the shadows of the Rock & Roll Hall of Fame, in Cleveland, Ohio along with seasoned rock studio veteran Jim Wirt (Fiona Apple, Incubus, and the Buffalo Killers). There will be an April 2nd CD release show at 1ST Ward @ Chop Shop (ALBUM RELEASE SHOW).

As part of the band’s early promotion, Vintage Guitar will premiere a video of the title cut, “Shake Your Faith” via the magazine’s Facebook page for fans to see on February 26th. The magazine has always supported and loved the band over the years.

“There are … riffs, hooks, and steady up tempos to keep you singing along tapping your foot and bobbing your head while delivered with contemporary sensibilities.” – Examiner.com

As with most of the band’s albums, the sound and songwriting on Shake Your Faith have grown and expanded, yet retained the true nature of the group. It’s the first studio record in over four years and the first to include “new” guitarist Eric Saylors.

As the band entered the studio, their songwriting approach for this record was different than it was on past albums when they were a 3-piece. Singer/Guitarist Jeff Massey comments on the band’s songwriting process, “Each song was different. I had a few totally finished songs, or Tod would bring a complete piece of music that would need melody and lyrics. And there were also a bunch of other musical ideas coming from both Eric and Joe, which we would all hash out together.” Drummer Joe Winters on the process, “Everyone really brought ideas to the table, collaboratively, more so with Shake Your Faith, than with any other of our records. That really created a special vibe around the songs.”

“…Taking a spin with the Chicago sons TSB is akin to traversing the backroads of American rock and blues, and then crossing the pond for a close look at how certain British rock gods purveyed that music.” – Vintage Guitar

The Arctic air coming off Lake Erie made for a secluded and quick session, as it was all recorded and mixed in 12 days. “What better circumstances to record in?” says Eric Saylors, “There weren’t any outside distractions!”

The band describes Shake Your Faith and the songs in their own three words:

“Rootsy Moptop Pop” – Tod Bowers on “Be As It May”

“Message To All” – Eric Saylors on “Bring on the Love”

Bassist Tod Bowers elaborates, “It allowed everyone to be inspired by the moment. Sonically inspired by what sounds you were hearing coming out of the speakers, what was happening in the room, musically between the four of us. And you can hear that in the recording.”

Shake Your Faith has a broad range of sounds from straight ahead rock ‘n’ roll to a psychedelic samba and lyrical direction that extends from love to murder. The gamut of subjects and emotions; “an album – a collective piece of music that’s meant to be heard front to back,” Saylors says with a smile. “The way the whole record flows, it’s like one long song… takes you on a little journey.” – Eric Saylors, TSB guitarist.

Started in 1998 the band has the same approach as their heroes; go and play live. With that mindset,  they spent this past winter playing one of their favorite albums live – Get Yer Ya Ya’s Out by the Rolling Stones in full length before rolling into their original material. What a great way for the band to pay tribute to one of their biggest influences. The band makes another trip to Europe in the spring to return to the states for a summer of festivals, clubs and theaters so check out their website for your city: Steepwater Band

The Songs: Shake Your Faith – Mama Got To Ramble – Be As it May – Break – Bring On The Love – Jealous Of Your Way – I Will Never Know – Walk In The Light – Gone Goodbye – Last Second Chance – Ain’t Got Love