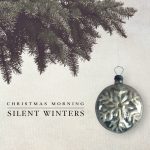 I know, I know, we are about two months away from Christmas Day and just a couple of weeks till the U.S. Thanksgiving, retail’s Black Friday, then the official kick-off will begin another Holiday Season; ending with New Years!  Where did the year go?

This year, Canada’s newest record label, Fallen Tree Records, has already released eight musical projects from some of the country’s most exceptional talent: 100 mile house, Jon Brooks, Logan and Nathan, and Jessica Heine. Founded by Peter Chapman, who once worked alongside legendary label owner Holger Petersen at Stony Plain Records for many years, he’s learned from the best, and with that, he will conquer the world!

And they aren’t even a year old!

For a finale of to a wonderful year the label is releasing, Christmas Morning by Silent Winters

Ottawa’s Silent Winters (Olenka Bastian and Jonathan Chandler), known for folk-inspired vocal harmonies, wrap-up nine sparkling holiday hits, along with the gift of a new song, to cherish this Christmas morning. Classics include “White Christmas,” “Have Yourself a Merry Little Christmas,” “I’ll Be Home for Christmas,” “Winter Wonderland,” and “Happy Holiday.” “Baby, It’s Cold Outside” sees the power roles reversed from male to female, while their goosebump-inducing versions of “I Heard the Bells on Christmas Day,” “Oh Holy Night” and “Jolly Old St. Nicholas” are delightful and surprising additions. Their own song, “Christmas Morning,” compliments the spirit of the season. It was recorded at Jim Bryson’s Fixed Hinge recording studio. Put another log on the fire, and feel the warmth emanated from this CFMA (Canadian Folk Music Awards) nominated duo.

So, whether you are in the snowy wonderland of Europe or you decorated a palm tree in Florida – this album is sure to bring you a little closer to getting into the season from anywhere in the world!

Uncategorized
Kfhox Appears At NY Marathon – Lace up your dancing shoes!
Ryan Dillaha Shoots From The Hip With Single “Gunsmoke” Out 11/1