It’s all about how you spin it 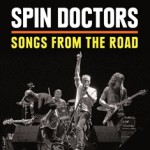 pin Doctors Pour A 3-Finger Whiskey Shot
Offers Fans A Toast With Songs From The Road DVD/CD
Out June 23rd on the Award-winning Ruf Records Series
“…rocks like a rodeo bull on amphetamines and had my blood pumping from the first few chords.” – No Depression

Atlanta, GA – Ruf Records recording artist Spin Doctors pay their old blues bar band tab with a June 23rd release called Songs From The Road, a live DVD/CD out on the label’s award winning series. The ever-popular band from the 90s had radio hits, million plus album sales and a Rolling Stone magazine cover but they always focused on their live performances. Filmed live at Harmonie Club in Bonn, Germany, this was a perfect setting to capture a dynamite set from a band that has made it their business to blow off the roof.

“We get up onstage and we turn it on,” says Spin Doctors vocalist Chris Barron. “We play our hearts out.”

Stop the man on the street and he might tell you the Spin Doctors are the million-selling legends behind hits like “Two Princes” and “Little Miss Can’t Be Wrong”. Ask a longer-term, harder-core fan, though, and they’ll remind you that Chris Barron, Aaron Comess (drums), Eric Schenkman (guitar) and Mark White (bass) came up playing for their lives on the sharp-end of the New York blues circuit.

“Those blues clubs were our bread and butter in the late-’80s,” says Aaron, “and people loved that we stretched out and jammed out.” – Mark White

The NYC scene took no prisoners. As such, when hysteria hit – around the time of 1991’s Pocket Full Of Kryptonite album – the lineup was already a stingingly tight live draw. Over the next quarter-century, fashion moved on, but the Docs’ talent for rocket-fuelling killer original songs onstage has only grown with age. And with 2013’s restorative If The River Was Whiskey album giving their catalogue a blues-flavored adrenalin shot, there’s never been a better time to catch them live. “I think a lot of people might come out and see us based on the hits,” says Aaron. “But then they get there and they’re like, ‘Holy shit, these guys have a whole other thing that I didn’t know about.’”

“Christopher Barron proves to be a funny, crowd-pleasing frontman…” –Allmusic.com

Ruf’s popular Songs For The Road live series has always been driven by the concept of capturing a band as they sound from the front row, and with this latest two-disc CD/DVD release, all the stops were duly pulled out in terms of production. Recorded live at the Harmonie club in Bonn, Germany, on October 17th, 2013, you can almost feel the gust of the speakers, the hot bounce of the crowd and the buzz crackle through the venue as much-loved studio material is twisted into bold new shapes. “Aaron, Eric and Chris are the most amazing improvisers I’ve ever played with in my life,” says Mark. “It’s almost like we’re four jet fighters, and we’ve all got each other’s backs.”

“We just all had the same sense of rhythm, and there was a feeling that it was more than four guys playing,” he said. “That always felt like magic.” – Chris Barron to NY Times (2005)

More than production values, though, Songs From The Road is about the songs with the Doctors chasing through a set list that runs the gamut of genre and vintage. Naturally, there’s a healthy slug of Kryptonite-era material (alongside the aforementioned über-hits, look out for early fan favorites like “What Time Is It?” and “Jimmy Olsen’s Blues”). But you’ll also find the track listing rooted squarely in the here-and-now, with Whiskey cuts including “Some Other Man Instead”, “About A Train”, “Scotch And Water Blues” – plus the song that Chris deems the best he’s ever written, “Sweetest Portion”. “Our tunes are not a drag to play live,” notes Eric. “It feels seamless from the stage, like any of the new tunes can sit with any one of the Kryptonite songs. We can do any of them.”

So pull up a ringside seat at the rebirth of the Spin Doctors. This is Songs From The Road; no smoke, no mirrors. They come armed with their best material yet, they are still playing for their lives. They are just an honest band; “Some bands, you go and see 25 years later and they’re just up there going through the motions,” says Aaron. “But I think because everybody is so serious about their craft, to me, we sound better than ever. We sound world-class now, I think.”