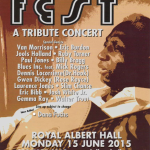 A NIGHT TO CELEBRATE THE LIFE AND WORKS OF LEGENDARY BLUES GUITARIST, LEAD BELLY

Announced today Lead Belly Fest is a tribute festival with a difference, on Monday 15 June at The Royal Albert Hall. A night dedicated to the life and works of iconic folk-blues singer, songwriter and guitarist, Lead Belly, whose ability to perform a vast repertoire of songs influenced the likes of Kurt Cobain, Led Zeppelin to name a few. Headlining the evenings celebrations are music legends Van Morrison, Eric Burdon, and musical maestro, Jools Holland, who will perform and recreate the legends classic repertoire.

A night of music celebrating the legacy of Huddie “Lead Belly” Ledbetter, famed for his vast repertoire of songs and incredible influence, Monday 15 June will see a historic line up of phenomenal musicians gather at The Royal Albert Hall, to pay tribute to the true legend that is Lead Belly.

Lead Belly Fest will feature an array of attractions including a photo exhibition and original Lead Belly memorabilia. In his notebooks, Cobain listed Lead Belly’s “Last Session Vol. 1” as one of the 50 albums most influential to the formation of Nirvana’s sound.

Famed for his vast repertoire of songs, Monday 15 June will see a historic line up of phenomenal musicians pay tribute to the true legend that is Lead Belly. Legendary artist, Van Morrison will headline the night, alongside the iconic, Jools Holland.

Other performances will include Animals frontman, Eric Burdon, Paul Jones, Gwen Dickey,  and Dennis Locorriere, coming together to celebrate a night of blues classics.

Josh White Jnr, Laurence Jones, Mick Rogers, Gemma Ray and Ruby Turner will also join this incredible line up for an evening to celebrate the music of Lead Belly. Throughout the evening, fans will be treated to performances celebrating his musical genius, with hits such as “Goodnight, Irene,” “Rock Island Line,” “The Midnight Special,” and “Cotton Fields.”

Lead Belly’s music still strikes a chord today, with his work being widely covered by artists, including The Beach Boys, Johnny Cash, Bob Dylan, Nirvana, to name a few, many more musicians cite him as a huge influence.  Lead Belly was born in Mooringsport, Louisiana, in the late 1880s and was later imprisoned in Texas for murder in 1918.  His incredible career saw him record over 500 songs, his last performance was at a concert at Carnegie Hall in 1949.

Today, Lead Belly is remembered not only as a musical giant but a legend in his own right throughout the world. Lead Belly Fest will be a night dedicated to his legacy, taking place on Monday 15 June at The Royal Albert Hall.

Tickets on sale from 9am on Friday 6 February and available via www.leadbellyfest.com or from: SEE tickets (hotline 0871 230 7157), calls cost 10pence per minute plus standard network charges

And all usual main agents. Tickets are subject to booking fee.