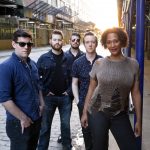 A Brooklyn Soul Queen And Her Rock & Roll Band

“A Brandy Alexander is a cocktail. But Brandi and the Alexanders is a New York R&B band that takes its soul shaken, not stirred. The 10-piece group boasts a full horn section and the powerhouse vocals of bandleader Brandi Thompson.” – John Schaefer, WNYC.

Red Parlor Records sets its eyes on releasing the debut album of one of NYC’s brightest bands – Brandi & The Alexanders on October 5, 2018, called How Do You Like It? They have been bubbling underground for a while and they now ready to hit the airwaves.

As the ass-kicking powerhouse vocalist for Brandi & The Alexanders, Brandi Thompson’s diva-level range and soulful melodies hit the listener right in the gut. Backed by The Alexanders, a funk and soul influenced rock band;  Brandi walks a tightrope between classic rock drive and R&B grit. Like fusing the Jackie Brown soundtrack, with The Miseducation Of Lauryn Hill, and Music From Big Pink together; Brandi & the Alexanders have a sound that is slick, big, and instantly classic.

Through her original songwriting, Brandi tells personal stories of love, regret, and jealousy. These songs capture a feeling that’s raw, powerful, and genuinely unique.  They recall the old Muscle Shoals and Memphis hey-day sounds and bring them to the present.

Born in Chicago to a Doo Wop singing father, performing is literally in Brandi Thompson’s DNA. After a series of boring day jobs in her 20’s, the fiery singer took that leap of faith to become a full-time performer and singer-for-hire. Over the past three years, Brandi has traveled the US and Europe, sung in stadiums, theaters, and clubs as a backup vocalist for Daptone artists, Aloe Blacc, Nick Waterhouse, Jay Stolar, and Animal Years.

Still, something was missing, and so, several incarnations of the band later, Brandi & The Alexanders were finalized. Each member brings to the table a certain “je ne sais quoi” with their talents. They range from school to street smart chops to writing books about Patti Smith to being in the thick of things at an NPR affiliated radio station in The Big Apple.

Keyboards: Ethan Simon came to the band from Baltimore by way of NOLA and Boston. A student of classic New Orleans funk and jazz, he stays busy also playing keys in the indie-pop-psych band The Shacks (Big Crown Records). Look for him tickling the ivories in a blink, and you’ll miss it cameo in this upcoming season of HBO’s The Deuce. His audition for the band was a “cold” (no rehearsal) performance with the group at Bowery Ballroom.

Drums: Eric Gottlieb grew up with guitarist Eric Wendell, and the two have played rhythm section in touring bands ever since. Offstage, he has been in the music industry for over a decade and presently is Assistant Program Director at WFUV radio in New York.

Since then they have been building an excellent hometown reputation with electrifying performances at The Mercury Lounge, Bowery Ballroom, Rockwood Music Hall and others. They were invited to perform at the 2016 US Open, and you can catch Brandi’s, jaw-dropping performance of “God Bless America.” at a City Field Mets game on YouTube.   They will make their AmericanaFest Conference debut on September 11, 2018, at the Cannery Ballroom in Nashville, TN to hopefully win new fans and wow critics.

Brandi & The Alexanders is a red-hot contemporary soul-rock band on a mission. Follow them via their socials:

Take a peek at their PASTE Session: https://youtu.be/MxCwtUDQk6E

Uncategorized
amafest 2018 or bust
Olivia Kellman is going her own way and on her own terms!