Olivia Kellman is going her own way and on her own terms! 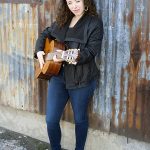 OLIVIA KELLMAN GETS PRAISE FOR

DEBUT RELEASE ON MY WAY

“… Kellman opts for a much more nuanced, intelligent path and, taken with the musical quality, it pays off for listeners in a major way.”  – Vents Magazine

“Out of nowhere comes a sassy number that pulls no punches in any area.” Skope Magazine

“Her voice has great tenderness, moving gentleness, but there’s also a level of gravitas surrounding her delivery that makes these words all the weightier” – No Depression

AMERICANAFEST ALERT: Olivia will be at the week-long conference and will be seen at the Select-O-Hits booth in the exhibit hall during the day.

“Hypocrite started after someone accused me of doing the same thing they did a week prior, which I called them out on. I was so frustrated that ten minutes later began writing the lyrics, thinking of them and anyone else who bears the name.” – Olivia Kellman

In an age where the dominance of digital downloading and streaming leads most emerging artists to play it safe and release only single tracks and short EPs, Olivia Kellman transcends the trend, blazing fresh and inspiring trails with the release of her expansive full-length debut On My Way.

Over the course of 13 tracks that effortlessly mix confessional, coming of age acoustic grace with edgy and hip funky indie-pop energy, the multi-talented Chicago based performer fulfills her lifelong dreams of making music. Olivia’s willingness to be vulnerable, and her boldness in sharing the heartfelt, multi-faceted stories of her life, will no doubt open doors for indie artists to stop limiting themselves and share the fullness of their life experiences and hard-won wisdom with the world.

Helping the singer achieve her powerful vision is veteran producer Jim Tullio, who has worked behind the boards magic for everyone from Aretha Franklin to Mavis Staples. In addition, she is mentored by Ron Alexenburg, previously SVP at Epic Records who worked with/signed music legends Meat Loaf, Boston and Michael Jackson. He says “Olivia’s music and songs, all written by her from her young life’s experiences. I’m proud to lend my support to her and be on her team”

While the focal single of On My Way is “Come Back Down,” a whimsical reflection on the freedom of being young, when “there was no gravity to pull us in,”– and her desire to break free from life in the margins. “Do You Know What It’s Like” was the first song she wrote for a project while attending college. She had been crafting tunes in her head for years, but taking an extracurricular guitar class and learning to compose on acoustic guitar was the key to her breakthrough as a songwriter.

By addressing her own struggles with self-doubt, bullying and an often socially crippling nonverbal learning disability, she speaks to young people struggling to discover their passion and unleash their gifts. Driven by a spirited pop/rock groove, she sings, “Do you know what it’s like to be part of a crowd/When all you wanna do is stand out?” She wonders, “or how it feels to second guess yourself?” Then, with purpose and clarity, she breaks through with a burst of determination and optimism. Yes, struggles are ongoing, mistakes are made, life isn’t always fair, but, “I’m not gonna stop till I reach the top/I’m letting my walls fall down.”

One of the most dynamic aspects of the emotional roller coaster Olivia commands as she takes us on the journey is how artfully she balances humility and gratitude (the title track, dedicated to her ever-supportive parents) and kind encouragement (“Good Morning Beautiful,” which concludes with the line “What a beautiful thing it is to be yourself and no one else”) with edgier tunes calling out a “Hypocrite” and struggling to accept her break the mold reality as a “Rebel Child.” The singer reveals an even deeper artistry and personal strength in overcoming struggles on gems like the post-romantic split tune “Unbreakable,” the soulful anti-bullying anthem “You’re Not Invisible” and the socially conscious anthem “Voices Need Sound,” which she wrote in the wake of the outcry to the police shooting and resulting riots in Ferguson, Missouri in August 2014.

In “Voices Need Sound,” Olivia addresses the reality that there are “Two sides to every story/Only one gets the glory/While the others in despair.” She reflects on “Marches in the street/Drummers add a beat/Just wanting to be heard.” Reflecting on her inspiration for this empowering song, she says, “While I wrote it in response to Ferguson, I also started thinking about people trapped in cycles of oppression. It’s a song for the voiceless, those who don’t have the opportunity or power to speak up. I drew on my own experience growing up with a learning disability and who has been bullied. Everyone is trying to silence these voices and they deserve to be heard.

Growing up as the daughter of a veteran music manager (whose clients, among others, were Minnie Riperton and Dave Mason) meant that Olivia was exposed to all kinds of music and a 70’s and 80’s CD collection. She also recalls her grandfather always singing Frank Sinatra’s “My Way.” Though she is influenced by iconic singer-songwriters, soul and jazz, and she’s been favorably compared to Carole King and Stevie Nicks. Natasha Bedingfield’s “Unwritten” anthem was Olivia’s life mantra that always comforted her and was her go-to belt song at karaoke for years.

“I think each song on this album tells a different story, with the overall theme being that music never gave up on me, even if I had been rejected or turned down,” she says. “It’s something that has always been there and will continue to be. Beyond my own personal narrative, it’s about encouraging people who have faced discouraging moments to push through and do what they love and what makes them happy.”

While Olivia shares 13 powerful slices of her life, heart and soul via On My Way, she makes it clear that music is only one aspect of who she is. There are always things about herself she hides, the same way she didn’t tell people about her disability for several years after she was diagnosed. Singing helps her get back to those places she has found difficult to share. Olivia captures a little of this – where else? – in song, with a few lines from “Rebel Child”: “I’m a bit ambitious/Live with no restrictions/But I’m not relentless/Just unexpected.” With the singer’s rise as an indie artist, she will face many fresh expectations – but that sense of the unexpected is what will keep us listening… and coming back again and again to experience more of her musical and life adventures.

To listen to the album: https://soundcloud.com/oliviakellman/sets/on-my-way-album

Follow her socials for more from her prepping to go to Nashville:

Uncategorized
MEET Brandi & The Alexanders
What do you mean Doug? Mess? What Mess?