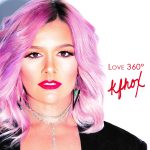 From The Big Apple to Music City, USA

“Music has been the common thread that has sewn together every chapter of my life. It’s saved my life during some of my darkest times.” – Kfhox

From the Bronx to Music City, USA, Kfhox shoots a Cupid arrow with her third album, Love 360°, out Friday, February 14th, on Karmically Sound/Stinger Boy Entertainment. The singer-songwriter has collaborated with Nashville producer, Darin “D-Roc” James (Royal Studios, Stacy Mitchhart Band, Luther Allison) at his Nashville Studio. James brought in some of the best session musicians in Music City to lay down the foundation of the songs that support her sultry voice.

Kfhox has a smooth voice that emanates sounds of jazz, pop, R&B with some hip-hop flare; her influences run deep and soulful, from pop and hip-hop to rock as she can truly sing it all. Past comparisons span from vocally to lyrically, from Amy Winehouse, Chaka Khan, Lisa Stansfield, and Jay-Z; she takes elements from everything she hears to create the Kfhox sound. Kfhox has taken the sage advice of Omar Hakim (David Bowie, Sting, Madonna, Mariah Carey) who once sat in on one of her sessions in New York and dropped the gem of taking on the role of being a “vocal character actor,” being who she needed to be to present the song in the voice that best tells the story of the music.

After setting her suitcases down in Nashville, Kfhox began to seek refuge in a community that holds up songwriters like Greek gods; and with those thoughts, she met her producer Darin “D-Roc” James and they connected instantly. The two began the singer’s next chapter of a musical journey in her new hometown.

“I pretty much lived on stage for ten years on the live music circuit in NYC and, up until about a year and a half ago, venues like The Shrine and The Bitter End felt like my family room. As I connected with D-Roc, it became apparent that I was being completely transformed! Right off the bat, from our very first session, songs came to me; I had five full songs written and arranged by the next recording session. Our creative process in the studio aligned, we locked into it as if nothing else existed but the music. Now I’m itching to get back on the live music scene. I think performing inspires me to write, and writing inspires me to perform,” gushes Kfhox. “He made me LOVE the studio!”

Kathryn F. Hoxie, her birth name, brings many sounds to her music, from lush pop-street to hip-hop and groovy R&B. The vibrant singer has always had music in her blood; from singing to the songs on the radio in the family car, to getting up on stage at The Bitter End in NYC to writing songs for veterans. From jobs that didn’t pay, romances that fizzled, to living in her car, songwriting has been her lifeline through it all. Words and language are in her blood, and they naturally flow out of her when she sings.

This past summer, Kfhox released her single, “L-O-V-E” – a fun and flirty song, along with a video that showed an edgier side of the artist. The song landed as a first-run contender for three Grammy categories, her fourth consecutive year in the Grammy process with the Recording Academy. Her others are as follows: 2016: “Daydream” (single), 2017: “Back With You” (single), 2018: Maktub (spoken word album).

But to get the complete picture of Kfhox, we’d have to roll back to Christmas Day 2017, when Kfhox hopped on an outbound plane for Nashville looking for a fresh start far from the hustle and bustle of New York City. Her story of rebuilding is a lot like everyone else’s, scary and adventurous, yet filled with hope. Then her mother died shortly after the move, and that put a significant pause on her getting settled in her new hometown. So, she began to dig deeper as a songwriter to release the pain, using songwriting and painting as a catalyst for healing.  (To watch the lyric video: https://youtu.be/TZ2wtNY27jE )

On the first anniversary of her mother’s passing November 13, 2019, Kfhox released, “North Star,” a tender ballad of bittersweet memories and love:

“’ North Star’ is a tribute to my mother, the late Ann Marie Hoxie, who passed on November 13, 2018. The song expresses the love and loss felt from losing a loved one and the challenge of finding one’s own North Star during grieving. The song is a message of hope for those who have experienced loss and conveys the importance of faith and self-reliance,” explains the vibrant Hoxie.

The power of faith

And all that’s unseen

Our light within outshines our scars

And I’ll find my way

By the light of my North Star – “North Star”

Since 2011, Kfhox has had a steady rise to each new level, where her music has taken her. Before that, she had held jobs that left her empty-handed, and it wasn’t until she lost a job that gave her a push to go after her music full time. Kfhox began to embark on grassroots crowdfunding for herself and raised over $11,000.00. She took that as a signal that she was on the right path.

Kfhox has released one full musical album and one album entirely of spoken word poetry. Starting with her EP in 2011, Light Shines Through Me included her song, “Screaming To Be Free,” which inspired her children’s book. A few singles were released digitally, and then Hoxie released her debut full-length album, Journey Of A Gemineye, in 2015. In 2016 her song, “Daydream,” written and performed by Hoxie, was under consideration for the 59th Annual Grammy Awards for Song of the Year and Best Pop Solo Performance. In 2018, she dove into the spoken word realm with her second album, her first spoken word album, Maktub, a passionate collection of her poems. She also took home Best Female Indie Album at Sugar Bar’s 2016 Indie Music & Art Awards by Creamteam NYC. She has traveled to Jamaica to record at Bob Marley’s studio to record the reggae remix of “Screaming to be Free,” skipping the luxury of the beach to the four walls of Tuff Gong Studios & House of Hits.

Kfhox’ s children’s book, a first edition coloring book based on her 2011 song, “Screaming to be Free,” has been a great meshing of her visual and musical abilities. The book has received great response from children and adults alike, giving it acclaim for its inspiration. Kfhox did the illustrations for the book and has built a canon of work over the past couple of years using paint, mixed media, and more to help her heal from her mother’s death. Shortly before her mother passed, the full-color paperback and hardcover editions of the book made their way to Barnes & Noble and Amazon, after signing on with Archway Publishing.

A lifelong visual artist, she studied at Rhode Island School of Design and is a part of a rich family lineage of artists on her father’s side. She has shown at galleries, and her work hangs in private homes across the country. Creativity seems to have no limit on how it moves through her- from music, poetry, and art. Kfhox credits her Self Discovery Life Mastery practice over the past three years, opening her up even more as a creator. The Mastery practice helps individuals to “unlock” themselves through “an evolutionary and revolutionary strategy to rapidly accelerate the self-mastery process,” gaining insight for a fruitful and well-balanced life. (mission statement from the website: https://sdlifemastery.com/)

LOVE 360° finds Kfhox connecting with her inner pop goddess with songs about celebrating life and love, with all its ups and downs. “This album reflects the new level of self-love I’m operating from, and this music truly reflects that ascension,” beams the singer.