Put Up Your Dukes… DON’T TRY TO FIGHT IT: David Olney 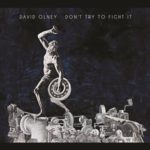 A Sucker-Punch Masterpiece Of Imagery And Words

From Seasoned Singer-Songwriter With

“This above all: to thine ownself be true.
And it must follow, as the night the day;
Thou canst not then be false to any man.”
—Polonius in Hamlet

David Olney doesn’t change his appearance; he changes reality’s appearance. He changes the room and the way we feel inside the room. He changes hearts, minds, and moods like the rest of us change bedsheets, only without the hassle of ill-fitted corners. His songs are marvels of surprise and delight.

With Olney, we arrive expecting the unexpected and still wind up sucker-punched.

On his release, Don’t Try To Fight It, (Red Parlor Records) we find David Olney carving these small works of art as the listener becomes enchanted by the cinematic depiction of colors, the weather, the room, the concerned clown and a whistling watchman.

Don’t Try To Fight It was produced and recorded at The Big Muddy Recording Studio located in Carleton Place, Ontario, Canada, by Brock Zeman. The young Canadian musician impressed the seasoned statesman so much he was given full production credit as earned Olney’s trust, and thus a friendship blossomed. The story of David Olney and Brock Zeman couldn’t be more organic and exciting to hear:  “David is an eccentric, a gentleman and a true artist who has devoted the better part of his life to his artistic vision,” the up-and-coming producer states. “I applaud his passion for creativity and his need to evolve and reshape his craft.”

“I like the ones where you take something in, and it’s suddenly more than you had assumed,” he says. “It’s like the plumber starts singing opera: You didn’t see it coming. There are very few encounters with art where a punch hasn’t been telegraphed.”

“If They Ever Let Me Out” is rocking swing-out tune with horns echoing the frustrations out of a pacing inmate that just wants to make a new life outside of his cell. The prisoner promises he will behave and be a good citizen, but as he ponders more, he laments, “you can’t get away with nothin’ anymore…”

The song “Big Top” is a classic Olney storytelling song, as he explains, “In my mind, I see a flat Oklahoma landscape with a circus tent in the distance. The sky is a sick green, and a storm is surely coming. In the foreground is a very concern clown.”

The ballad of “Ferris Wheel” is sweet and lilting. The listener is along for the ride as it depicts the innocence of first love as the slow-paced ride rotates. Olney and his primary co-writer John Hadley are master storytellers, taking us to the top.

The push and pull vocal/lyrical action behind title song, “Don’t Try To Fight It” is another genius move by David Olney while sitting down with Kieran Kane to help finish up the song. The phone rings, Olney stops and says “I hear a ringing, somebody get it…” the train passes by the house during the session, and it becomes a part of the song, “I hear a train, I want to ride it…” Olney can truly interact with his surroundings, grab it and make it bigger than life.

David Olney continues to develop as a true artist and Renaissance man: he is a Shakespearean actor, a writer of sonnets and the on-air host of “Free Fall” on Nashville’s radio station WXNA. His weekly video social media video posts called “You Never Know”; are engaging with David talking about everything from culture to touring to playing songs always mixing it up with some Olney humor.

One of the songs chosen for the album was a previously unrecorded tune written in Olney’s youth called, “Yesterday’s News,” that tells of the never ending quest for “fame and fortune” as part of every storyteller’s journey. It’s the thrill and the underbelly fire of inspiration that keeps him going.

“I was writing about how thrilling it was to be in Nashville, trying to get songs out there,” says Olney, whose songs have gotten out there on his 26 acclaimed albums, and in versions by Emmylou Harris, Del McCoury, and Linda Ronstadt. “That feeling is still there for me: The feeling that something… some really good thing… is looming.”

What The Press Says:

“… Gripping and thought-provoking, proves Olney to be a stone-cold storyteller with an intriguing philosophical bent.”  – Acoustic Guitar Magazine

“In the tradition of Johnny Cash and Tom Waits, Olney has become a pioneer of the Americana music scene” – San Francisco Chronicle

“Olney rocks with blistering intensity … but he also mesmerizes.”  – The Philadelphia Inquirer