Thorbjørn Risager & The Black Tornado – Change My Game Out 2/17 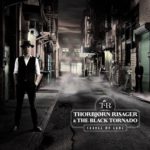 Talk about a tough act to follow. Back in 2014, Thorbjørn Risager & The Black Tornado released Too Many Roads: the award-winning ninth album that saw the golden-voiced frontman and his seven-piece lineup showered with global acclaim. For the fans who have followed the Copenhagen band since their formation in 2003, it felt like a career-best release.

But we were wrong. With Change My Game, Thorbjørn has raised the stakes once again. In a world where most bands are content to tread water, here’s an album that breaks new creative ground, explores fresh musical directions and delivers a bold batch of songs that are at once catchy and immediate, but rich with deeper meaning.

Released in January 2017 on Ruf Records, Change My Game is not just an album title, but also the guiding ethos that has driven this band from the start. Since making their first impact with 2006’s From The Heart, Thorbjørn and his all-star lineup have dodged media pigeonholes and broken down the boundaries of genre, their confidence to experiment growing with every year spent together on the road. Now, on this 11th album, their musical leap is greater than ever before, with dynamic arrangements sent through the roof by the band’s musicianship and Thorbjørn’s electrifying vocal.

Change My Game finally achieves the studio sound that Thorbjørn has always heard in his head. For the first time, the eight musicians decided to self-produce and mix the entire album, and the result is a visceral production that showcases their best material to date. Rock-influenced songs like “Dreamland” are hard, fiery and ferocious. Ballads like lead-off single “I Used To Love You” have an aching emotional power. Meanwhile, for the fans who love the Tornado’s fresh take on classic blues, there’s “Train,” which opens with a locomotive sound, a lone vocal, and an acoustic guitar – before the band turn up the heat and bring the song to its horn-driven climax.

At a time when technology rules the music industry, Change My Game is an album that runs on human chemistry, and that’s testament to the 800-plus shows that this lineup has played together in 21 countries from the Canada to India. Firm believers in the power of live music, Thorbjørn and the band will take Change My Game out on the road in 2017, with a touring schedule that will see them raise roofs across the planet and convert countless new fans to the cause.

Fourteen years into their career, these are high times for Thorbjørn Risager & The Black Tornado. Perhaps you thought they’d peaked with Too Many Roads. But with Change My Game, the only way is up…